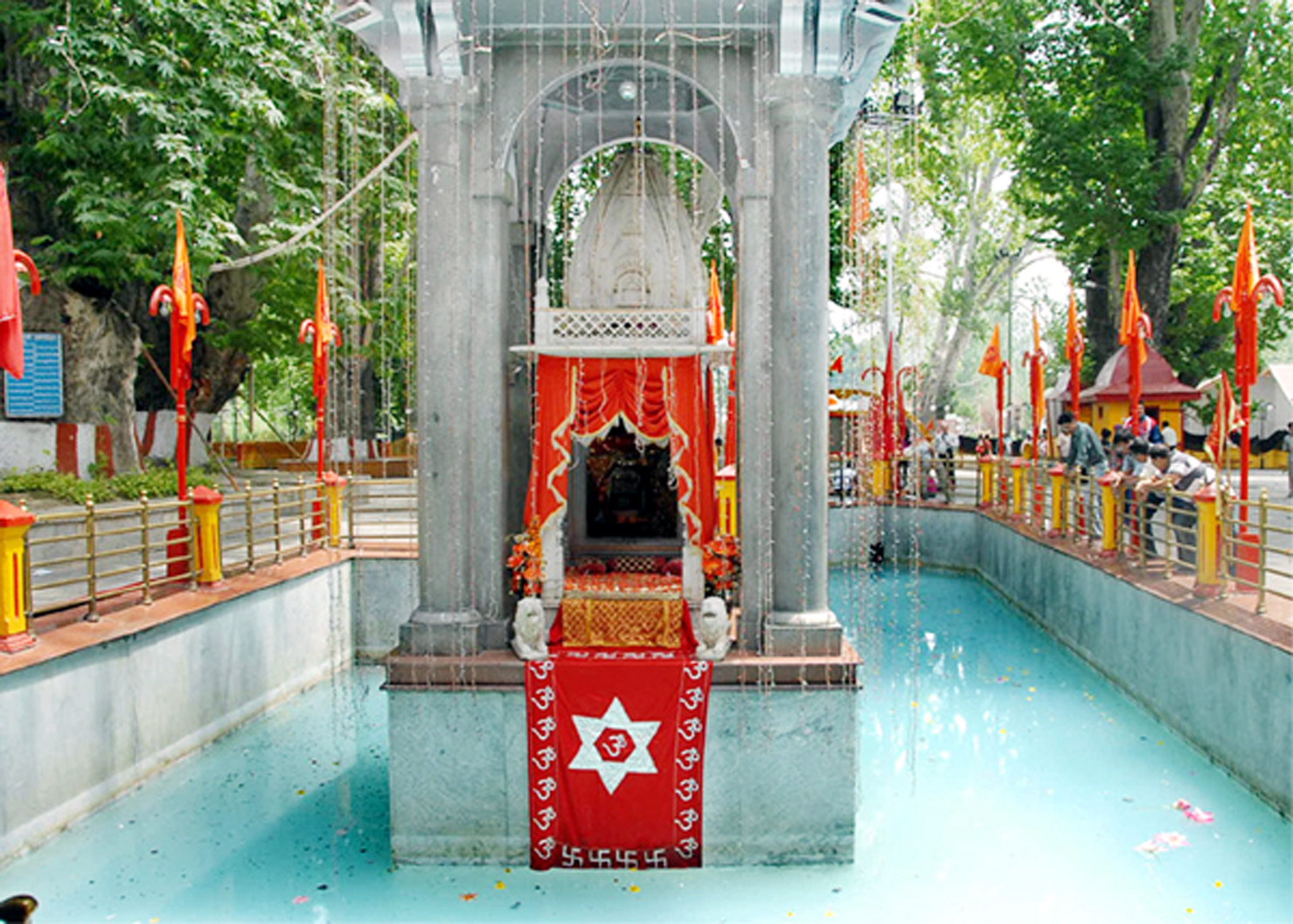 Dr  S K Raina
Tulmul or Kheer Bhawani temple, is one of the most popular          and holiest Hindu temples of Kashmir. The shrine is dedicated to the worship of Bhawani, the Divine Mother or Goddess of         this Universe. Tulmul is situated at a distance of around twenty four kilometers from Srinagar          in the district Ganderbal,     towards the north of the city.
During the Hindu era, Tulmul was a place of great learning. The holy spring in the middle of which the temple of Maharajni (Divine Goddess) is positioned, is located on the bank of a branch of the river Sindh. The holy spring has a septagonal shape with the apex called Paad(feet) situated to the east. The northern and southern sides are longer than the western side, which is called Sher or head. It is shaped like AUM(OM) in the Sarada script. Mention about Kheer Bhawani Shrine is found in famous historian Kalhana’s (12th Century) Rajtarangini. Kalhana writes that the sacred spring of Tulmul is situated in a marshy ground. The Brahmins of Kashmir worship this spring and pilgrims from every corner of the country visit Kashmir to have the darshan/sight of this place. The mention of this temple is also corroborated in Abu-i-Fazal’s book Aini-Akbari in which is written that the area of Tulmul extended over the area of hundred Bighas of land, which got sunk in the summer season and formed into a marsh. Swami Rama Tirtha and Swami Vivekananda also visited this place to have the darshan of the place. With the pouring of milk and throwing of sugar candy in the spring by the pilgrims, a thick and solid layer was formed at its bottom. When it was cleared, the ruins of an old temple and shrine slabs engraved with figures were discovered. Here many images were also found but nobody rebuilt the temple till the 1907 when Maharaja Pratap Singh who was the disciple and worshipped this goddess, got a marvelous temple of marble made in the midst of the spring which shines like a pearl in a shell.
Some people are of the opinion that there was a mulberry tree near the holy spot of Kheer Bhawani which, in Kashmiri language , is called Tul Mul. But Tul Mul is also derived from the Sanskrit phrase- Atul-Mulya- that is of great value. This means that all other pilgrim centers are of lesser value than this one. The significance of this shrine not to be found elsewhere, is that the water of the Spring changes its colour from time to time. It takes on various hues like red, pink, orange, green, blue and has often light green, red, rosy and milky-white shades throughout the year. Abul Fazal in 16th century and Swami Vivekananda in the year 1894 have testified this fact. Any shade of black colour is supposed to be inauspicious for the inhabitants of the valley.It is said that this blackish color was prominent in the year 1947 when the Pakistani raiders attacked the peaceful valley and also in 1990 when mass exodus of Kashmiri Pandits took place.
An Annual Festival of Goddess Kheer-Bhawani is celebrated every year on the eighth day of the full moon in the month of May/ June. The devotees of the Goddess Mata Kheer Bhawani observe fast and gather at this holy shrine. This year the annual festival falls on 12th June 2016. The offerings to the Goddess in the form of milk, candy, flowers etc. are usually provided by the local Muslims to the devotees which, undoubtedly, denotes and highlights the feeling of religious harmony in the strife-torn valley of Kashmir.
(The author is senior fellow, Ministry of                    Culture Government of India)

Rubon Saproo
Among these shrines one has been built on mountainous terrain at Bhawani Nagar, Jammu after some spiritual souls and ardent devotees had  a holy vision of the presence of the divine force at this sacred place. The holiness of the place can be well realised from the fact that one of the devotees claimed to have dreamt Mata saying that she too had come to Janipur after the migration of community. Another, devotee claimed that a lion has been observed paying obeisance on many occasions at the spot where “Bhoomi-Puja” was performed for construction of the Kheerbhawani shrine. The sacredness of the shrine of Mata Bhawani can also be well realised by some other stories of the devotees.
According to the devotee L D Koul, “the most important and difficult task ahead of the Sanstha was to install the idol after construction of the shrine at Bhawani Nagar. We went to Kashmir along with a professional photographer and took about 80 snaps of Mata’s idol so that a replica of the idol could be prepared. But, when we returned back to Jammu, we were astonished to know that the whole film was empty. Again, we went to Tulmulla and this time made sketches of the idol instead of snaps. But, on way to Jammu, our bus met with an accident and many of us got seriously injured. After the incident, no one dares to touch those sketch pages. Later on, Hawan and special prayers were performed at Tulmulla and then only it became possible for us to make the replica of the Kheerbhawani idol.” The Bhawani idol housed in the shrine of Mata at Jammu is the replica of the idol of Tulmulla and was engraved at a place 100 Kms away from Chennai. The stone used in the idol has been brought from Kanchipurunam.
The history of the Kheerbhawani shrine at Bhawani Nagar-Janipur Jammu dated back just twenty 22 years when a small group of 12 devotees, who were in constant touch with each other after migration, longing to review the Pooja on the auspicious nights of Ashtami and Navmi. Initially, they performed Pooja and Hawan at the house of one of the devotees at Gangyal. This practice of performing religious activity continued for just three years and finally the decision was taken by the group to have its own Pooja-Sathal in Jammu. The idea was not easy to give its practical shape due to financial constraints and other reasons.
But, the dedicated group of devotees began to search for the land and donations and in the process reached the house of Smt. Prabawati Koul at Bhawani Nagar. During small halt at her house, a spiritual soul Mr Arjan Dev Veshin, who was accompanying the group, was suddenly wonder-struck to notice a piece of land at mount adjoining to the house and yearning to construct the shrine here. His idea was opposed by the other members who maintained that the temple of Mata cannot be built at the steep place. However, everyone agreed to  build a temple at this palce after a piousperson Mr Shamboo Nath Koul supported the idea by saying that “Mata is residing on this mount.”
At last the “Bhoomi-Puja” for the revered shrine was performed on 20th February, 1993 by Rughnath Kokiloo Jee and soon the one room construction has been started. Instantly, Shri Kund was dug out and Shri Bindu was temporarily erected, both on the pattern of Tulmulla. Since then, the construction work of the shrine complex is going on. Over the years the shrine has gained prominence in Jammu and people were seen daily visiting the shrine to take the blessing. However, large gathering of devotees particularly Kashmiri Pandits assembled here during an annual festival of “Jeshth-Ashtami,” to pay obeisance at the lotus feet of Mata. Devotees usually feel the tears in their eyes or even inside their mind when they pray  to the goddessin devotion and contemplation.