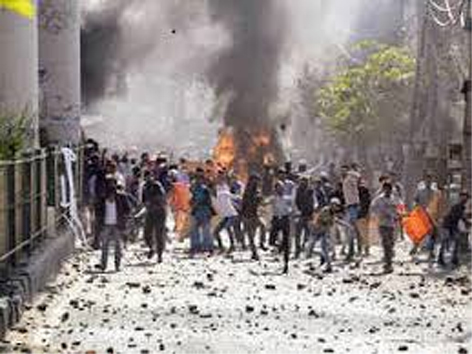 Harsha Kakar
In response to a question on whether India was losing its allies over its Kashmir policy, Citizenship Amendment Act (CAA) and the Delhi riots, S Jaishankar, the Indian foreign minister stated, ‘maybe we’re getting to know who our friends really are.’ While it may have been a means of conveying a message, it is evidently a failure of Indian foreign policy. The latest to join the bandwagon on those criticizing Delhi on the riots was Iran’s supreme leader Ayatollah Ali Khamenei. He asked India to confront ‘extremist Hindus’ and stop the ‘massacre’ of Muslims.Harsh words from a supposed ally.
His criticism followed a tweet of his foreign minister, Javad Zarif, who stated, ‘For centuries, Iran has been a friend of India. We urge Indian authorities to ensure the wellbeing of all Indians and not let senseless thuggery prevail. Path forward lies in peaceful dialogue and rule of law.’
Pakistan and Turkey had, as expected, criticized the riots and blamed the Government for having a hand in the same. For both these countries, joining hands against India is natural. While Pakistan does so out of habit and compulsion, Turkey seeks to dominate the Islamic community, overthrowing Saudi Arabia.
There were even protests in Afghanistan in regions where Tehran holds sway. Indonesia, which has generally maintained silence on Indian actions, criticised the violence.Various international groups and some members of the US Congress had earlier criticized the Indian government for its handling of the riots.
Bernie Sanders, a Presidential hopeful even accused Trump for maintaining silence on the riots, while in Delhi. Criticism from multiple western groups were based on the view that the riots were one sided and allowed to escalate by the Government. The Indian Government responded by stating that these comments were ‘misleading and inaccurate.’
There have been protests in Bangladesh over CAA. The opposition in Bangladesh had announced it would not permit the Indian Prime Minister to enter the country. The criticism was fuelled by rumours that implementing the National Register for Citizens (NRC) and CAA is aimed at targeting the Indian Muslim community. Modi’s visit has since been postponed due to Corona Virus.
An intervention application has also been filed in the Supreme Court by the United Nations High Commissioner for Human Rights(UNHCR) on CAA.The UNHCR office stated that while it welcomed the ‘stated purpose of the CAA’ to protect ‘some persons from persecution on religious grounds,’ but raised the issue of exclusion of various sects of persecuted Muslims under the law. The Indian response was that CAA is an internal matter of India and concerns the sovereign right of the Indian Parliament to make laws.
In recent times all major Indian decisions have come under criticism for some reason or the other. This was expected as India is a growing global power and under international scrutiny on all its actions and decisions. However, what was unexpected was criticism on the government for its handling of the riots, which were largely planned and timed to peak during the visit of President Donald Trump to India, seeking to embarrass the country.
The criticism has been based on one sided reports in the western press, some by their correspondents and some by Indian journalists. Critics even termed it as massacre of Muslims, whereas it is anything but that.Even Indian politicians seeking to discredit the government and in the bargain the nation, joined the bandwagon of claiming a Government hand in the riots.
India’s neighbours and allies, who have generally maintained silence on Indian decisions, have also come out in open criticism. India has Muslim majority nations on its periphery. This indicates that Indian internal actions are impacting its relations with its neighbours. While some Islamic countries were expected to comment, Iran was not.
Majority Muslim nations which commented possess a worse human rights record in treating internal dissidence. India, on the other hand has avoided commenting on internal actions of any country, other than Pakistan’s treatment of its Hindu minorities. No Islamic country has accused China of its treatment of Uighurs, possibly because of fear of angering China and losing on investment and trade. Hence, while their criticism could be ignored, it is indicative that Indian influence in its near region is not dependent on economic aid and a failure of its foreign policy.
Most western nations have backed Indian actions as the Indian diplomatic corps was spending valuable time seeking to convey the right image. However, there are certain groups globally, including in the US, where an anti- India lobby exists. It was to avoid giving importance to such lobbies in the US that the Indian foreign minister cancelled his interaction with the US House foreign affairs Committee.
The Indian government has been largely losing the global information war by not being able to rightly project its stand. In the case of the recent riots, projecting it is as planned would have also been largely detrimental, as no nation seeks to project an internal intelligence failure.
This has been compounded by the fact that the current government isinternationally known to display a Hindutva image. Hence, any decision which it takes indicates a bias which may never have been the intention. India was thus compelled to either ignore the criticism or employ its diplomatic might to convey the right message. Neither case worked to Indian advantage.
Indian internal actions should never lead to condemnation from friends and allies. If this happens then it is evidently a failure of the Indian diplomatic corps and lack of its assessment of international reactions. Ignoring or issuing a demarche may not be the final solution. Indian foreign policy planners need to go back to the drawing board to re-evaluate their foreign policy approach, especially in the immediate neighbourhood. They need to move from reactive to the proactive mode.
The author is Major General (Retd)
feedbackexcelsior@gmail.com