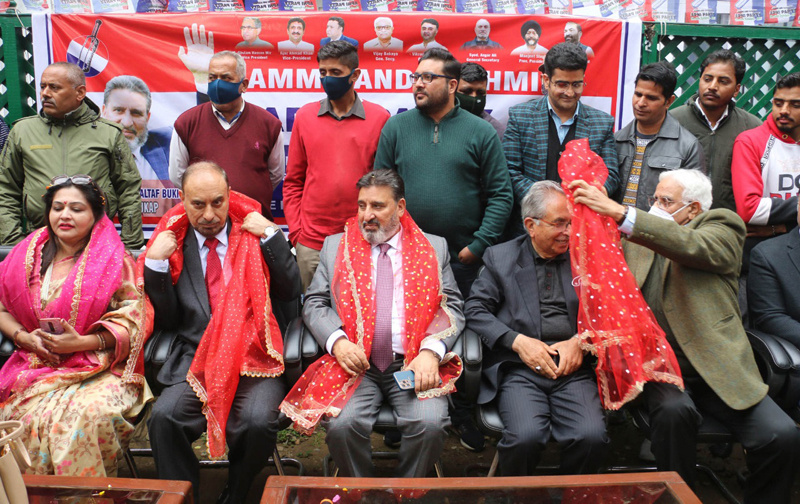 JAMMU, Feb 25: Apni Party president Syed Mohd Altaf Bukhari has demanded special provisions for reservation of women in Govt jobs in J&K.
He was addressing a felicitation programme which was organized at Apni Party office in Gandhi Nagar, Jammu.On this occasion, Namrta Sharma was felicitated by the Party president on being nominated as State president of Women Wing of the Party.
Appreciating the contribution of women in the society, he said that the women should be empowered socially, educationally, economically, and politically in J&K. He said the Govt should have special provisions for women reservation in Govt jobs in J&K so that they can be empowered.
“Apni Party believes in empowerment of women and if this does not happen, the society cannot develop equally. We must protect and give constitutional rights to the women so that they can be empowered socially, economically, educationally and politically,” he said while addressing the Party leaders and workers.
Namrta while speaking on the occasion assured that the women wing will strengthen the ground level workers in both the regions. “We will work in all 20 districts and strengthen the party’s roots,” Namrta said.
Prominent among those who were present on the occasion include Ghulam Hassan Mir, Dilawar Mir, Vijaya Bakaya, Vikram Malhotra, Syed Asgar Ali, Nirmal Kotwal, Dr Rohit Gupta, Ajaz Kazmi, Arun Chibber, Raqeeq Ahmed Khan, Abhay Bakaya, Partap Singh Jamwal and others.