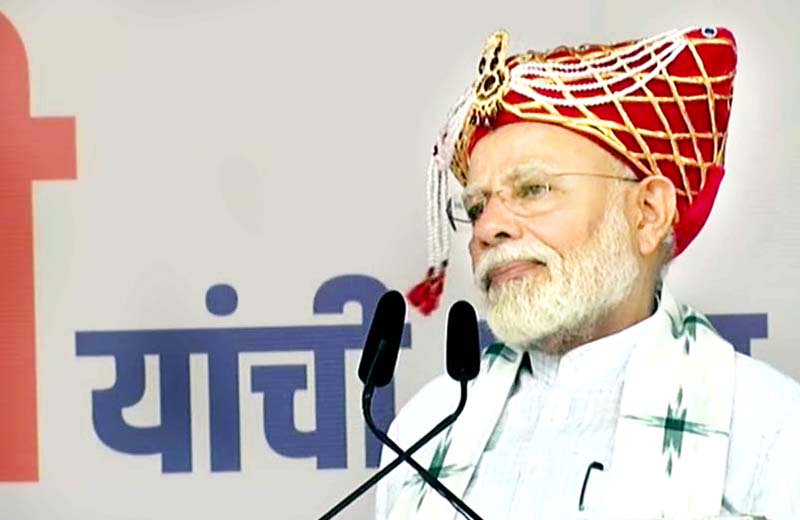 Sanjeev Pargal
JAMMU, Sept 19: Reaching out to the people of Kashmir, Prime Minister Narendra Modi today called upon all Indians to help build a ‘New Kashmir’, embrace people of the State who have suffered for decades and turn the Valley into ‘jannat’ (heaven) again and maintained that the Central Government decisions on J&K were aimed at freeing the people from vicious circle of violence, terrorism and separatism.
In a series of tweets and address to a rally at Nashik in Maharashtra, Modi referred to “Kashmir Hamara Hai” slogans in the rally to underscore that now it was time for the rest of the country to build a ‘New Kashmir’ and embrace Kashmiris.

He also spoke about applying balm to the wounds of the people who have suffered a lot for decades. “Will you come forward,” he asked. The crowd roared back in the affirmative.
Asserting that they had promised the nation that they will make fresh efforts to solve the problems of Jammu and Kashmir and Ladakh, the Prime Minister said he was satisfied today that the nation is moving towards it.
“We always knew and said `Kashmir Hamaara Hai’ (Kashmir is ours), but now, there will be a new slogan for every Indian… “Ab Milkar Ek Naya Kashmir Banana Hai. Wahan Fir Se Ek Baar Swarag Banana Hai. Har Kashmiri Ko Gale Lagaana Hai (Now we have to unitedly build a New Kashmir. Kashmir has to be made a heaven again. We have to embrace every Kashmiri),” Modi said.
The Prime Minister said during last 40 years, 42,000 people have been killed in Kashmir.
“Now 130 crore Indians will join hands..entire India would come forward…the people should make a ‘New Kashmir’ and heal wounds of people which they have suffered for 40 years due to wrong policies of New Delhi. It is responsibility of the Government of India to make the people of Jammu and Kashmir free of problems,’’ he added.
Without naming Pakistan, Modi said the country has realized that under the garb of new decisions taken by the Central Government on Jammu and Kashmir, efforts were being made from across the border to create uncertainty and mistrust in the Valley.
Noting that all out efforts were being made to spread violence in Jammu and Kashmir, he said, the youth, women and sisters have made up their mind to come out of vicious circle of violence.
“The people of Jammu and Kashmir want development… they want jobs and your ‘sevak’…the Government and all the people together were committed to start new era of development in Jammu and Kashmir and Ladakh,’’ Modi said.
The country does realize that there is an effort to create instability and mistrust from across the border. There are many attempts to incite violence, he said.
While the people of Jammu and Kashmir and Ladakh have high hopes and aspirations but some of our friends in the Opposition have started doing politics over major decision taken by the country on Jammu and Kashmir, the Prime Minister lamented but said entire nation is one and the people whether they belong to rural or other areas…whether they are educated or uneducated and whether they are elders of youth, they are united.
“Unfortunately, senior leaders of Congress and NCP were not cooperating on the decision. They have right to criticise me, the Government but in national interest they shouldn’t indulge in such activities which suit the inimical elements. Their statements have been quoted and exploited by the neighbouring country,’’ Modi said, adding while confusion in the Congress ranks was understandable, the stand of Sharad Pawar (senior NCP leader) has hurt him.
Again without naming Pakistan, the Prime Minister said the world knows where the terror factory is and from where the pictures of atrocities were pouring in. He said it was responsibility of every Indian to make India victorious at the world level.
Modi also accused opposition parties of trying to derive political mileage over the Government’s decision to scrap Article 370 of the Constitution. “This decision, aimed at strengthening the country’s unity, will also help the people of Jammu and Kashmir to realize their aspirations and dreams,” Modi said.
He added that the end to special status of Jammu and Kashmir will remove the obstacle to implementing laws that are in place in the rest of India and open the path to bring in various Central projects that help various sections of people in other parts of the country.
“Kashmir lost out on a lot of good that could come its way from Delhi. That hurdle has gone. They will benefit directly from Delhi now. It will benefit millions of people and give them a promising and better future,” Modi said.
Accusing the UPA Government of not being serious on national security, Modi said the Congress-led regime had in 2009 ignored the demand of 1.86 lakh bullet proof jackets for security personnel.
In the BJP-led regime, not only have the requirements of our forces been met but bulletproof jackets made in India are now being exported to 100 countries, Modi said.
He said, “today, we are manufacturing our own bulletproof jackets and these jackets made in India are now being exported to over 100 countries.” “Two mighty helicopters have recently been inducted. Very soon the Rafale fighter jets will join the IAF. We have taken the long pending decision to have a Chief of Defence Staff for better co-ordination between the three forces.
The attitude of the previous (Congress-led) Government was never good when it came to security preparedness and this has to be remembered again and again, Modi said.
“In 2009, a demand for 1.86 lakh bulletproof jackets was made. Till 2014, our jawans were fighting on the borders without bulletproof jackets. Time passed and the Congress Government supported by NCP never paid attention to this demand. But when the BJP-led NDA came to power, we revived the process and made sure that the jackets are manufactured in India,” Modi said.
“Today, India manufactures bulletproof jackets of international standards and they are being exported to 100 countries,” Modi said.
“For us, national security is of prime importance.
There is nothing important to us than the country. Even its desire is an order for us,” he said.