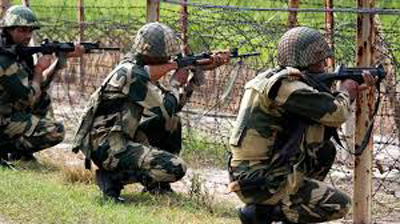 JAMMU: An Assistant Sub Inspector of BSF suffered injuries as Pakistan violated the ceasefire along the Line of Control in Poonch district of Jammu and Kashmir
“An ASI of BSF was injured on the intervening night of Friday and Saturday after India and Pakistan exchanged firing in forward area of Krishna Ghati sector of Poonch district,” official sources here said.
They said that during exchange of firing, one of the Shells landed at forward post Baloni in KG sector which resulted in splinter injury of a BSF personnel namely ASI Satypal Singh.
He was referred to Rajouri hospital for treatment where his condition was said to be stable, they added. (AGENCIES)