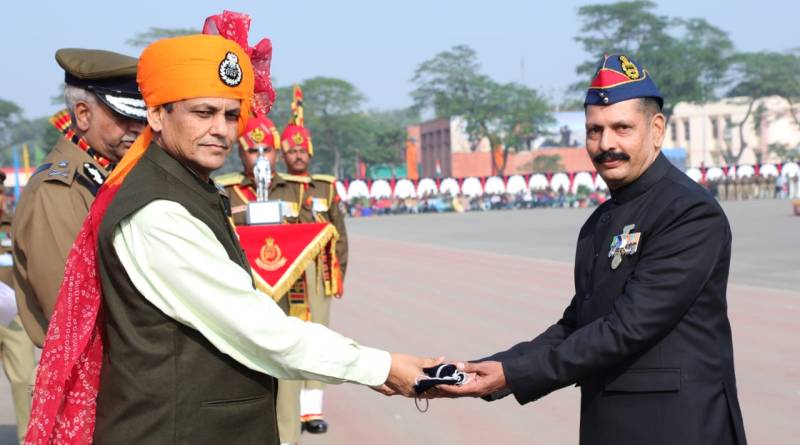 NEW DELHI: Minister of State for Home Affairs Nityanand Rai on Sunday said that BSF personnel have been diligently protecting borders of the country and worked hard in serving the citizens during difficult situations.
“BSF personnel has been diligently protecting our borders and worked hard in serving the citizens during crisis situations. The country is proud of the sacrifices made by the BSF while defending the country,” Mr Rai said addressing the gathering.
He took salute at the 55th Raising Day of BSF here.
Appreciating the supreme sacrifice made by the BSF jawans in the line of duty, he said that because of them every citizen is fearlessly contributing inthe development works of the country.
Mr Rai said that under the able leadership of Prime Minister Narendra Modi and Union Home Minister Amit Shah, the government has increased the retirement age for CAPF personnel from 57 to 60 years, allowed jawans to spend 100 days in a year with their families and non-entitled jawans can now air travel when deployed in Jammu and kashmir.
This Government has also taken initiative of increasing the personal insurance for CAPF personnel given by the banks to 30 lakh under the Para Military Salary Package Scheme (PMSP).
He said that multiple efforts from the Government has been made to give all possible facilities to jawans of Central Armed Police Forces.
Praising the force, the Minister said that the Kartarpur Sahib Corridor at Dera Baba Nanak is secured under the supervision of Border Security Force. He said that due to immense effort of jawans, enemies have to think multiple times before any intrusion or committing any crime.
Mr Rai further said the government is taking constant steps towards the modernization and making the Paramilitary Forces stronger.
The Government is committed to making the Forces powerful, provide all facilities and welfare to its personnel, the Minister added, On the occasion, the Minister inspected an impressive parade by BSF jawans and took salute of the march past. He later presented Police Medals for Gallantry and Meritorious Services to the BSF personnel.
He also released the yearly magazine “Borderman”. Earlier, he paid homage to martyrs at BSF memorial.
Attractions of the Parade included armed female contingent, Camel/ Horse unit, march past by BSF Camel mounted Band and a display of the latest equipment and armaments. During the ceremony, the BSF Jawans and Camel Contingent also displayed acrobatics to a huge round of applause from the viewers’ galleries.
Speaking on the occasion, BSF DG Vivek Kumar Johri said that the nation pays homage to the BSF personnel who made supreme sacrifices for the security of the nation.
He said that BSF is also fulfilling its social responsibilities by helping the Government in implementing the central Government schemes to serve the people of this country. Senior officers of BSF and Ministry of Home Affairs were also present on the occasion.
(AGENCIES)