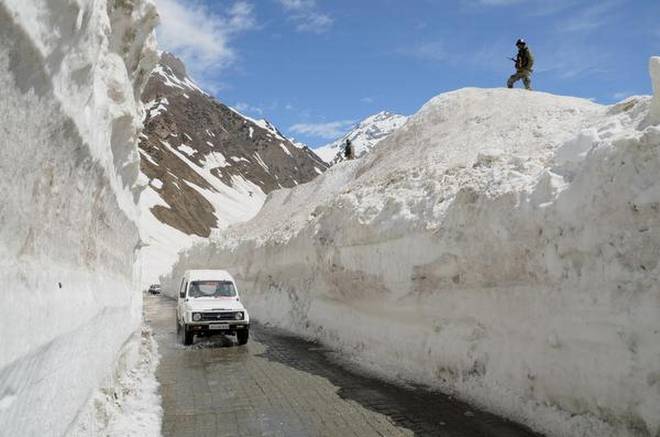 Fayaz Bukhari
Srinagar, Dec 2: As the Union Territory government in Ladakh presses for keeping the Zojila pass open during the winter for extended period, the Border Roads Organization (BRO) is battling against the inclement weather and sub-zero temperatures to clear the snow.
According to BRO officials, this year the precipitation has been the highest so far since 1986 which has posed major challenge for road clearance and keeping the highway open for extended period. Since the first snowfall in first week of November this year, Srinagar-Leh National Highway is mostly closed.
The Highway was closed for traffic on November 6 this year after snowfall but was opened for traffic on 10th of November after snow clearance. However, on 15th November it was again closed after snowfall in the area and was briefly opened for traffic on 20th November and was closed again on 21st of November. The BRO again cleared the snow from the Zojila pass on 26th November evening but it got closed during the night again due to snowfall. The highway is closed for the traffic for last 12 days as around 5 feet snow has accumulated on the Zojila and there are multiple avalanches that have blocked the highway.
As per the BRO officials, the snow clearance operation is going on and it has been cleared from Gagangir to Baltal by the men and machinery of the BRO. They said that from Baltal onwards to Zojila Pass, snow clearance operation is on despite challenging weather conditions prevailing in the area.
Vamsee Krishnan, Officer Commanding , 122 RCC said that 10 kilometer stretch of the highway is being cleared of snow as the workforce have been put into operation to provide extended connectivity to Ladakh with Kashmir. He said that they are hopeful that they will clear the snow in few days.
“The weather conditions are extremely unfavourable at the Zojila top where temperature goes down to minus 12 degree during these days. At least 20 active avalanche sites are present on Sonamarg-Gumri stretch and over 5 feet snow has accumulated on the highway. On daily basis, two avalanches trigger down the road making snow-clearance difficult,” he said.
“Our workforce is facing lot of difficulties as there have been lots of avalanches in the complete stretch. Recently, Capt Shubham Sood and DSP Traffic Fahim had a narrow escape when both of them came under avalanche. Despite such challenges we are on the job to open the highway,” he said.