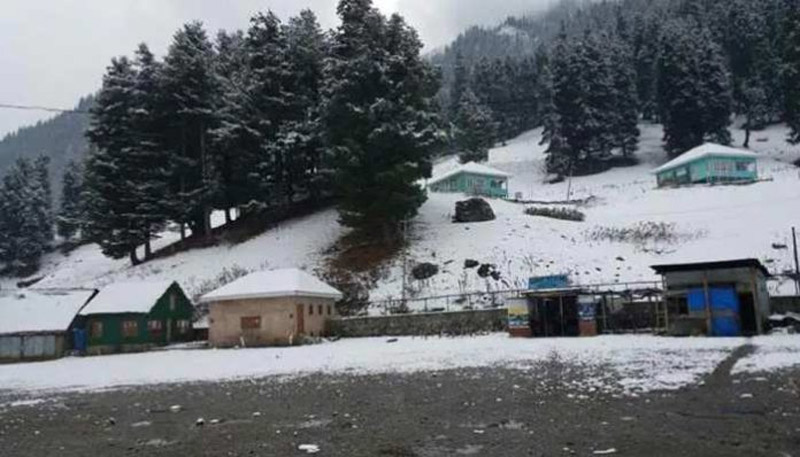 Fayaz Bukhari
SRINAGAR, Dec 6: The Building Operation Controlling Authority (BOCA), of the Sonamarg Development Authority (SDA) last week cleared the construction of a hotel of an influential Kashmiri businessman and a hotelier by violating the Supreme Court guidelines, High Court directions and over ruling the observations made by the two important members of the authority.
As per the minutes of the meeting issued (No. DCG/PS/F-99/2022/412 dated 05/12/2022) by the Chairman of BOCA there were 26 applications seeking repair and fresh constructions but only one fresh construction of an influential businessman and hotelier, Altaf Ahmad son of Saifudin was approved. He is owner of Taj Vivanta hotel in Srinagar.
The hotel, Integrated Tourist Complex, has two hotel blocks, two huts, one security hut, one reception building and a restaurant block of 3000 square feet, 1200 square feet, 256 square feet, 1620 square feet and 2300 square feet respectively. He has been allowed to construct the hotel 200 feet (60.96 meters) from the river Sindh bank while High Court has banned all constructions in 100 meters (328 feet) area from the river bank.
The 23rd meeting of the BOCA has not only over ruled the observations of two important members of the Authority – the Regional Director Ecology, Environment and Remote Sensing and Chief Town Planner Kashmir but also violated Supreme Court guidelines and High Court directions on the issue.
“We have noticed that constructions are taking place in Sonamarg. We direct that no constructions shall be carried out till further orders,” read an earlier judgment issued by the HC.
The issuance of fresh construction permission is also against the Supreme Court judgement (dated 3-6-2022) regarding creating of Eco-sensitive zones around protected forests, National Parks and wildlife sanctuaries. A copy of the judgment was sent to the BOCA chairman Ganderbal district (no. WLWC/Estt/2022-23/686-93 dated 30-06-2022) by the Wildlife Warden Central Division Srinagar in June this year so that the Apex Court’s order is followed in letter and spirit.
A day after the clearance of the hotel construction, the CEO of the SDA in a letter (No. CEO/SDA/2022/2485-91 dated 30-11-2022) to the chairman BOCA has expressed reservations over taking action on the decisions taken in the 23rd BOCA meeting in view of over ruling of the observations of the two important members.
“They have communicated their observations regarding the decision taken in the meeting. Being the important and technical members of the committee, their observations can’t be ruled out,” reads the letter.
“In order to avoid any controversy and legal involvement in future, I would like to request your good self to kindly call the said officers in your office to sort out the issue, furthermore under these circumstances it will not be advisable for me to take any further action in the matter till the issue is resolved,” the letter read.
The Chief Town Planner Kashmir in a letter to the CEO, SDA (No. BOCA-Sonamarg/ CTPK/2022/398283 dated 30/11/2022) has asked him to put on hold the decisions taken in 23rd BOCA meeting held last week regarding the permission for fresh construction in Sonamarg.
“All such cases seeking fresh/new constructions within Sonamarg master plan area and approved by BOCA in its 23rd meeting as on 29/11/022 may be put on hold till the decisions of the 22nd BOCA meeting and the observations of the undersigned and Regional Director, DEERS are taken to logical conclusion,” read the letter.
Regional Director of Environment & Remote Sensing has also raised objections over the permission granted to fresh construction in ecologically fragile zone Sonmarg saying that the tourist place has already crossed the threshold of built-up area.
“…more than 78 hacs much above the threshold limit of 50 hacs is already built up in the local area,” reads the letter (No:-DERS/RDK/22/239-41 dated 30-11-2022) sent by the Regional Director of Environment & Remote Sensing addressed to the CEO SDA.
The letter says that no permissions can be granted in the fragile eco sensitive areas without Environmental Impact Assessment (EIA).
“…DEERS is constrained not to issue any NOC/EC officially or through BOCA for fresh construction permissions for safeguarding the Ecology and Environment of these fragile eco sensitive areas till EIA is conducted in accordance with section 8 (b) of EIA Notification No 2006 read with amendments, particularly SO 5733 (E) dated: 14th November, 2018 issued by MoEFCC, Government of India,” read the letter.
Surprisingly, the observations of the Regional Director Ecology, Environment and Remote Sensing and Chief Town Planner Kashmir have no mention in the minutes of the 23rd BOCA meeting.
Contrary to their observations, the minutes of the meeting in case of Altaf Ahmad read: “…there is no requirement of NOC from the Regional Director of Environment & Remote Sensing Department Kashmir under any law in this case.”