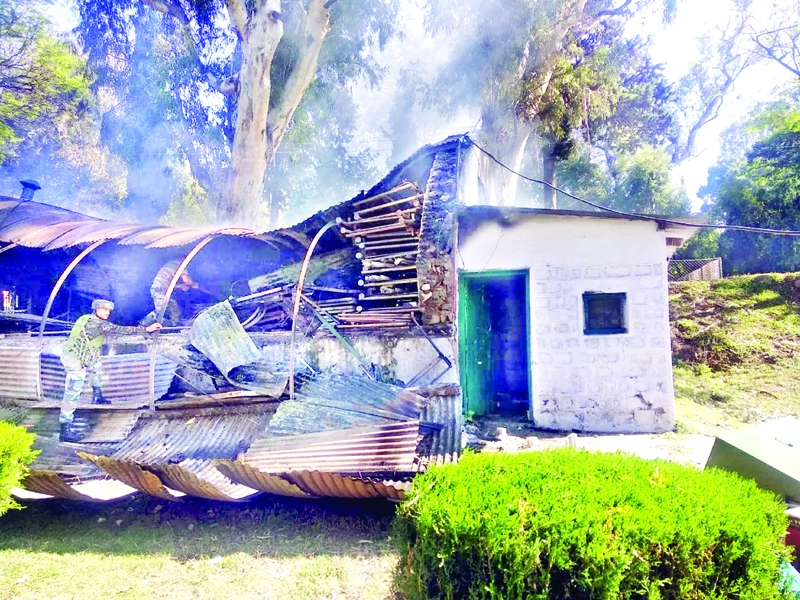 Sanjeev Pargal
JAMMU, Oct 23: Pakistani troops today violated the ceasefire along the LoC in Poonch district with one of the shells landing inside the Brigade Headquarters in the town but causing no casualties.
The ceasefire violation came just two days after three Indian soldiers and two heavily-armed Pakistani intruders were killed in a gunfight along the Line of Control (LoC) in nearby Rajouri district.

Click here to watch video
“Pakistani troops fired rocket propelled grenades (RPG) and small arms at around 1035 hours during ceasefire violation. One round landed on a barrel type store shelter in Poonch causing it to catch fire,” Jammu-based Defence spokesman Lt Col Devender Anand said.
“Initial analysis indicates caliber of 105/106 mm RCL (recoilless gun). Further details are being ascertained,” he added.
Earlier in the day, when the blast was reported inside the 93rd Brigade Headquarters at Moti Mahal in Poonch, the spokesman had said that it had nothing to do with cross-border shelling from Pakistan.
However, Senior Superintendent of Police, Poonch, Rajiv Pandey later told reporters that initial investigation suggested that a bomb fired from across the border landed inside the brigade headquarters of the Army causing a minor fire.
In another ceasefire violation, Anand said one round of 82 mm mortar landed in Jhalas in Krishna Ghati sector in the evening.
“One muffled blast around 1800 hours was misconstrued as blast in the garrison,” the spokesman said adding there was no casualty reported.
Meanwhile, India has conveyed strong protest and concern to Pakistan over the killing of three Indian soldiers while thwarting an infiltration attempt on the LoC in Sunderbani sector of Rajouri district on Sunday.
India summoned a senior official of the Pakistan High Commission in New Delhi and condemned in the strongest terms such a provocative action by Pakistan, which revealed the neighbouring country’s complicity in aiding and abetting terrorism and exposed the hollowness of its deceitful claims of promoting a constructive engagement with India and desire for peace.
“The Pakistan High Commission official was summoned to the MEA and a demarche was made, lodging a strong protest over the loss of lives of Indian soldiers during the cross-border infiltration bid by Pakistani terrorists in the Sunderbani sector on October 21,” sources said.
“It was informed that two Pakistani armed intruders have been killed by the Indian security forces during the ensuing firefight and the Government of Pakistan should take custody of the dead bodies of its nationals,” the MEA said.
India also conveyed to the Pakistani side its grave concern over the continuing incidents of unprovoked ceasefire violations by the Pakistani forces along the LoC and the International Border (IB).
“Despite repeated calls for restraint and adherence to the ceasefire understanding of 2003 for maintaining peace and tranquility, Pakistan forces have carried out 1,591 incidents of unprovoked ceasefire violations along the LoC and IB in 2018 so far,” sources said.
Pakistan was also asked to abide by its bilateral commitment not to allow any territory under its control to be used for supporting terrorism against India in any manner, they added.
Army has already issued stern warning to Pakistani counterparts over aiding and abetting infiltration attempts on the LoC in violation of ceasefire agreement saying such grave provocations could have serious repercussions.
Army had gunned down two infiltrators, both Pakistanis in combat dress, on the LoC in Sunderbani sector on Sunday when they were trying to enter into the Indian territory with the intention of causing major subversive activity. While three Army soldiers were martyred in the gunbattle and another one was injured, troops had foiled the intrusion bid forcing other militants to retreat to Pakistan occupied Kashmir (PoK).
Troops have been maintaining very high alert all along the LoC in twin border districts of Rajouri and Poonch following inputs that large number of militants were camping at launching pads on Pakistan side waiting for an opportunity to sneak into the Indian territory before onset of winter as snowfall will close mountains and peaks used by the militants for intrusions.