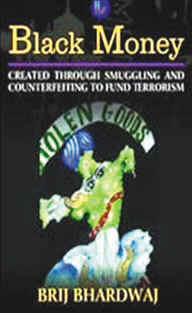 A comprehensive book on how unaccounted money, popularly known as black money, shows the many faces of unclean cash. The perception has been promoted by saffron robed and some do-gooders like Anna Hazare to focus on corruption and tax evasion as the only or main sources of this cash. However, governments round the world have woken up to the reality that counterfeiters of currency and all kinds of goods, including pharmaceuticals, smugglers and other law breakers have been oiling the wheels of terrorism.
The book has been written by Brij Bhardwaj, a seasoned journalist with 50 years’ experience on some national dailies. He has done good research and come up with facts and figures, charts and official as well as non-official reports to lace up his narrative. The 176-page book outlines the areas of inquiry in the introduction taken up in the 10 chapters that follow. The Government of India has come up with the estimate that 20 per cent of the gross domestic product is covered by counterfeit goods, smuggling and illegal dumping of sub-standard goods, but there have been suggestions in the past that 50 of the national economy is accounted for by black money. But these estimates are not backed by any solid evidence. But it is well known that money is brought to India for use in running election campaigns even as a lot of money hidden within the shores is used to woo the voters.
Organized criminal groups, perceiving low risk, compete with legitimate business, but their tentacles spread to smuggling, drugs, liquor, tobacco, cigarettes and the goods they sell are not only human health hazards, but amount to economic aggression as well as terrorism in collusion with international and national networks spanning borders down to the last mile lane in a city, town and village. Certain governments encourage these syndicates and protect terrorist outfits as part of state policy even as they pretend to be victims of terrorism themselves. According to U.N. estimates the dirty money in any given year could be as much as $2 trillion.
There appear to be tax havens galore and some banks are believed to have not been careful enough in complying with legal processes in substantial deposits made with them. A hue and cry around the world about Switzerland being lax has forced the Swiss Government and banks there to disclose the names and entities which have deposited huge sums, which could be suspected to be money laundering or from illegal sources. Under American pressure, President Obama’s government secured a few hundred names and impose a fine of some billions of dollars on a Swiss bank for failure to comply with norms set by the Federal Reserve and other authorities.
India sought information as well, but the Swiss Ambassador told the Government that they had found that only $2 billion in their books belonged to Indians. Apparently individuals with interests have been fleet footed in moving money. But it is clear that the government has been trying to address the problem of counterfeiting and piracy under pressure from chambers of commerce and industry.
The Federation of Indian Chambers of Commerce and Industry took an initiative and set up a committee on anti-smuggling and counterfeiting activities destroying the economy or CASCADE for short. It discovered that there are 10 laws available and a robust legal framework, but infrastructure to enforce these laws needs to be augmented in view of the police preoccupation with law and order.
However, industrial enterprises themselves have taken a number of steps to protect their trademarks as well as their products from the counterfeiting, just as the government has been trying to ensure that counterfeiting currency is increasingly difficult.
The film industry worldwide, which was hit by pirated DVDs has partially met the challenge by releasing hundreds or thousands or prints at the same time, countrywide and worldwide to dissuade pirates enjoying an advantage. The life span of a new film on screen has been cut down to six weeks to three months and in that time the DVD is officially released to the market. Within three to six months the film also is shown on TV channels which buy rights at a good price. Music companies are a step ahead. They buy film music or other celebrity music in advance of the film release for good prices paid to producers. The book suggests that instead of looking for where the black money is parked efforts be made to stop its generation though counterfeiting and smuggling. Instead of shooting the messenger the problem should be resolved at source.