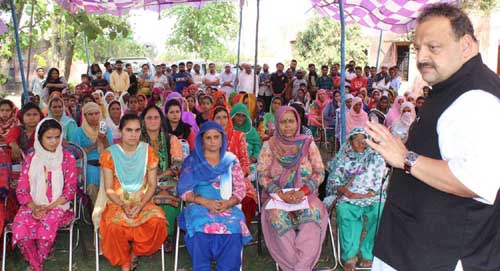 BAJALTA, June 12: National Conference Provincial President Devender Singh Rana today asked BJP to desist from hoodwinking public opinion by indulging in rhetoric and emotive sloganeering, saying its false promises have already generated discontentment among youth.
“With 2019 elections coming closer, the BJP flock has begun hovering around the politically sagacious people of Jammu with false promises and dreams”, Rana said while interacting with workers at Bajalta.
Rana said the BJP is now fully exposed for playing with sentiments of Jammu people and failing in keeping up commitments. Coming again before the people in the guise of Jammu’s self-styled Messiahs is like sprinkling salt on wounds of electors, who had trusted and mandated the BJP in both Parliamentary and Assembly elections in 2014. He said the ongoing nightmarish misrule will continue to haunt Jammu people for decades together.
The Provincial President said the BJP had been hammering discrimination and invoking Jammu pride for six decades of its wilderness in the opposition but once getting into the cradle of power in partnership with equally opportunistic PDP, it has left the people in lurch and pushed the youth to deprivation. He said the hysteria created over the Jammu interests is tearing apart into pieces, as the promises made before, during and after the 2014 elections have evaporated like bubble of water.
“The BJP has lost its sheen as also moral right of claiming to be the champions of the Jammu cause, as power corridors are more attractive for its leaders than reaching out to alienated masses”, he said, adding the people are feeling let down, as the entire system of governance has gone haywire.
Rana referred to the dicey politico-administrative situation in the sensitive State and said that reactionary politics of the BJP have hugely impacted the governance. To divert the attention from its failures, he said, BJP has again embarked on hoodwinking people by shifting blame to other parties, which is sign of frustration. He cautioned the people against BJP’s duplicity and hoped they will see through its game-plan of whipping up passions.
Rana announced Rs 20 lakhs out of his CDF for the construction of a Community Centre in the area.