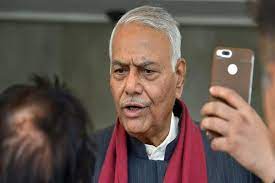 BENGALURU, July 4:
Hitting back at joint opposition candidate for Presidential polls Yashwant Sinha for his “rubber stamp Rashtrapati” comments, BJP national General Secretary C T Ravi on Monday said a feeling that an Adivasi woman is not capable for the position, itself depicts one’s “nasty mindset”.
He was reacting to a question regarding Sinha urging BJP-led NDA’s nominee for the elections, Droupadi Murmu, who belongs to a tribal community in Odisha, to make an affirmation that she will not be a “rubber stamp Rashtrapati”.
“Certainly the country doesn’t need a rubber stamp Rashtrapati, but also, in the same way, the mindset of indulging in a false propaganda against a self-made Adivasi woman, who has proved her capability, is dangerous. The state of mind that feels oneself alone to be worthy is dangerous,” Ravi said.
Speaking to reporters here, he said, “Murmu, an Adivasi woman has already proved her capabilities, as the Governor of Jharkhand, as a minister and MLA in Odisha and as a lecturer in a college. A feeling that the Adivasi woman is not capable for the position itself depicts one’s nasty mindset.”
Murmu will be visiting Karnataka on July 10 to seek votes, Ravi said, as he also stated that based on the current numbers, her victory is certain in the July 18 presidential polls.
Sinha, who was in Bengaluru on Sunday as part of his poll campaign, attended the Congress Legislature Party meeting here, and accused the BJP-led central government of misusing agencies like ED, CBI, Income Tax to “fix” political opponents.
Reacting to this, Ravi, MLA from Chikmagalur, said, “ED or Income Tax departments can’t do anything to those who are honest, but those corrupt can’t escape from them. If one is corrupt, he or she has to worry; those honest need not and will not.”
He also welcomed the JD(S) plans to support Murmu in the presidential polls.
Former prime minister H D Deve Gowda-led regional party has already indicated support for Murmu. (PTI)