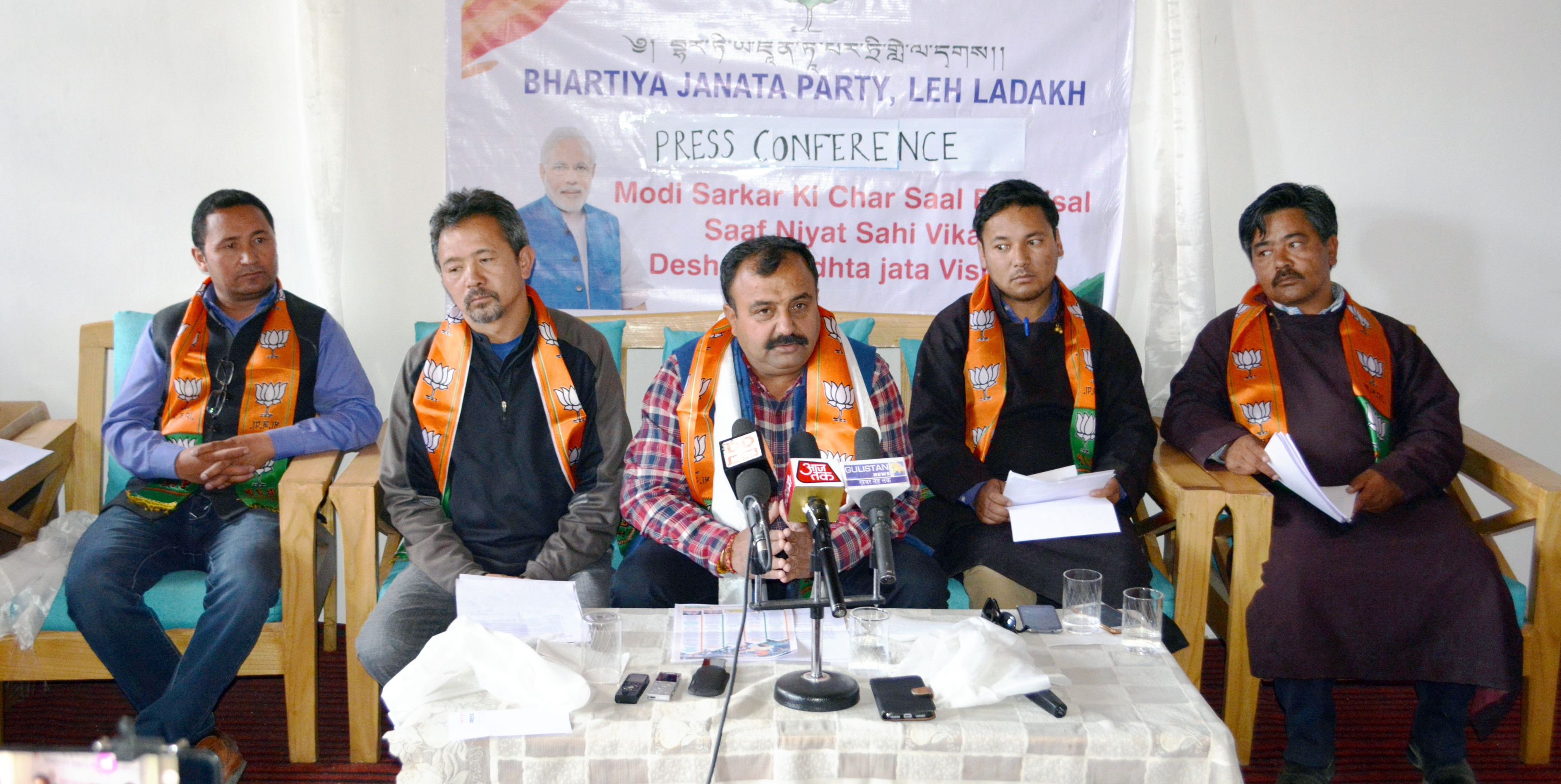 Excelsior Correspondent
LEH, May 30: BJP MLC, Ch.Vikram Randhawa today said that after Independence BJP is the only Government which came before the public of Ladakh region to present the annual report card every year.
Addressing a press conference here, today Randhawa said now the party is presenting four year achievements of Modi Government at Centre i. e “Modi Sarkar Key Char Saal Baimesal. BJP Leh president, Tsewang Gonbo, Executive Councillors, Mumtaz Hussain and Tsering Sandup and BJP general secretary, Dorjay Angchuk were also present during the press conference.
Randhawa said that since BJP Government came to power nearly 115 different schemes were launched to benefit the people of India and added that BJP is committed to connect Kashmir to Kanyakumari through National Highway Project and work is in full swing with road construction rate of 27 kilometres of per day.
“Article 370 is a core issue of BJP and we have not left the issue but since we are in coalition in the State, we don’t raise it beside it is also subjudice” said MLC while responding to a query.
Responding to another query BJP Leh president, Tsewang Gonbo said during Union Home Minister, Rajnath Singh’s visit to Ladakh, the people of the region unitedly presented a common demand of UT.
BJP claimed that the Jan Dhan Yojna was the initial scheme launched by PM under which more than 31 Crore accounts were opened so that poorest among the poor shall have access to banks and have also insurance cover which followed by Ujjwala Yojna and various other schemes.
He also highlighted the beneficiary schemes launched for the people of Ladakh region which included special 10% allowance for employees, connection of transmission line of Nimoo Hydel Project with Northern Grid,  sanction of Rs 650 crore under BRDP for Changthang to provide connectivity to this farthest area, setting up of Nubra Development Authority,  enhancing of financial powers of LAHDC, Leh from 5 cr to 20 crore, handing over construction of Nimoo-Darsha road to National Highway Development Authority, earmarking of Rs. 120 cr from PMDP for the Ladakh region, sanctioning the University of CIBS, sanctioning  of Rs.300 cr for KBR Airport the expansion of which is under consideration of Government and in order to promote Pashmina Rs 35 cr under PPP and Rs.20 cr in addition for Dehairing Plant have been sanctioned.