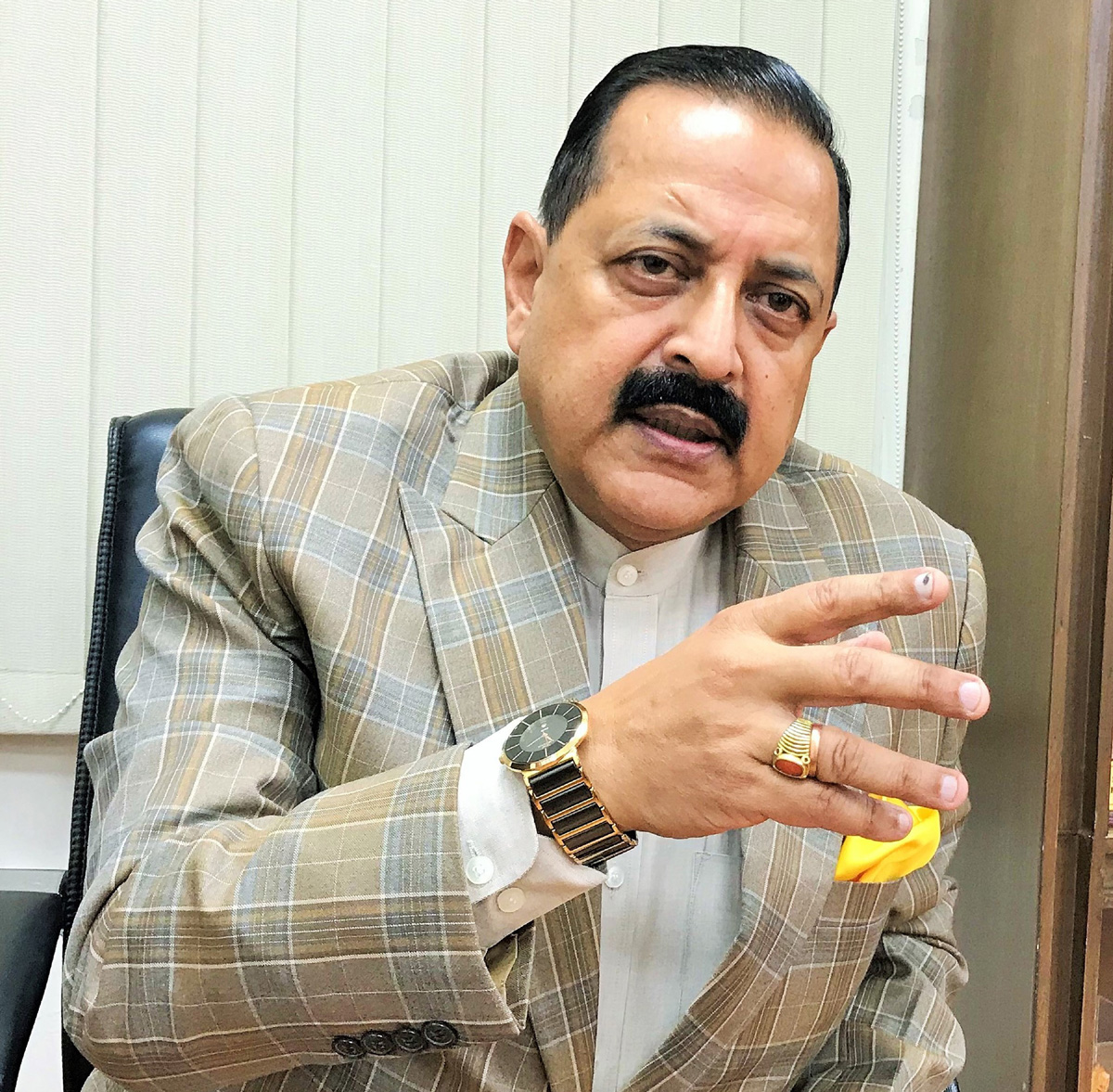 Excelsior Correspondent
JAMMU, Nov 10: Making a scathing attack on dynastic parties, Union Minister of State in PMO with Independent charge of North Eastern States, Dr Jitendra Singh today said that Bharatiya Janata Party (BJP) has broken the jinx created by self styled leaders that J&K can’t be run without one or two parties.
Talking to reporters here today, the Union Minister said that the dynastic parties who misled the people of Kashmir for years together have been totally rejected by the masses.
He rejected the contention of former Chief Minister and NC working president, Omar Abdullah that his party was the mainstream party in the State said that BJP is the largest mainstream party of the country and in the recent Urban Local Bodies (ULB) elections the BJP made its presence in Kashmir also while the space of NC has considerably shrunk.
On Omar Abdullah’s demand that Government should hold dialogue with mainstream parties in the State, Dr Jitendra Singh said it is futile strategy to deflect issues. They (NC) themselves say that they are mainstream which is not a fact as their space has shrunk in Valley and people have rejected them totally.
The Union Minister said they haven’t refused the dialogue. The Governor says that every one is welcome who wants to meet him and talk to him. Home Minister, Rajnath Singh was in State for three days last time and the leaders of dozens of organizations met him.
On inviting the Hurriyat Conference to talks with Central Government, he said they (Hurriyat leaders) know that the day they will hold the talks with Centre the so called movement they pursue will end.
Dr Jitendra Singh said that NC should set its own house in order instead of making misleading statements. The Kashmiris in recent ULB elections voted for democracy and new faces have started coming forward in Kashmir to strengthen the democracy and they challenged the dynastic parties who had taken the people of the Valley to ransom for decades together for their vested political interests.
Maintaining that the militancy is on wane in Kashmir valley, he said this is the last phase of terrorism in Kashmir as youth of Kashmir have moved ahead and they in large numbers are competing in Civil Services and IIT, JEE examinations at national level. “These are only oldies who try to hold them back to militancy to maintain status quo. But he hastened to say that these people will not succeed in their vicious designs as the 70 percent population is of youth who don’t want to lag behind the rest of country in development and want to take full advantage of Prime Minister, Narendra Modi’s policies and programmes of building a new India of his dreams.
Expressing serious concern over the repeated ceasefire violation by Pakistan, Dr Jitendra Singh said the kind of retaliatory action taken by Narendra Modi Government during over last four years has not been witnessed in last six decades.
He, however, down played the changing of names of Faizabad to Ayodhya in UP and said that in past the names were also changed like that of Calcutta and Madras and the same was not done on communal lines.
Dr Jitendra Singh congratulated the people of district Kathua for having set an example for the entire country by rejecting divisive politics and refusing to fall in the trap of social divide motivated by vote bank considerations of Congress, its allies and certain disgruntled elements.
He complimented the people of Kathua for having given BJP a leading role in all the six Municipal bodies in the district. He said, unfortunately, Kathua had been in the news a few months ago because of an unfortunate incident and a perception was sought to be created by the Congress and its allies as well as some disgruntled elements that BJP will face its waterloo because of Kathua and Hiranagar. However, contrary to this wishful thinking of opposition parties, the people have given an evidence based rejoinder by electing Municipal Committee in Hiranagar with absolute majority of BJP and making the Municipal Council of Kathua absolutely “Congress Mukt”.
While in Basohli, Bilawar and Nagri also the BJP supported candidates have been elected Chairpersons, Dr Jitendra Singh said, significantly in Lakhanpur a Muslim Gujjar backed by BJP has emerged as head of the Municipal Committee and has thus reinforced BJP credentials and commitment for equitable development without any consideration of caste, creed or religion.
Dr Jitendra Singh said, majority of the population today comprised of youth, who are awakened enough to appreciate a series of path-breaking developmental works accomplished in Kathua district during the last four and half years, including Bio-Tech Park, Keeriya-Gadiyal bridge, Juthana bridge, Medical College, Engineering College, Seed-Processing Plant, Atal Setu bridge, Highway Village, Passport office, Dreamland Park, new University Campus, new Kendriya Vidyalaya, Sulabh Toilets and Seema Bhawans along the border, reservation for International Border residents on the same lines as LoC, Expressway Corridor from Katra to Delhi via Kathua, Lakhanpur to Doda new National Highway, Chattergala Tunnel, an additional over one dozen new bridges in a short span of time etc.