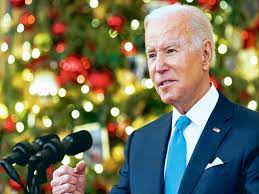 Washington, Dec 25:So long eggnog, shrimp cocktail and pet-shaped sugar cookies.
It’s been a more sombre holiday scene at the White House this year under COVID-19’s shadow. President Joe Biden and first lady Jill Biden have replaced the packed parties and overflowing buffet tables of the past with food-free open houses, face masks and testing for the unvaccinated.
Beyond the impact on Biden’s first Christmas in office, the virus and its variants largely put the kibosh on the entire White House social scene for 2021, starting with an inauguration that positioned flags in place of people on the National Mall.
“I think it’s been really tough on them,” said Philip Dufour, who was Vice President Al Gore’s social secretary. He noted that many events were not held while the president and first lady did others over Zoom.
Major social events scrubbed from the calendar included the White House ball for the nation’s governors and the Easter Egg Roll, the second straight year that springtime ritual has been cancelled.
The Democratic president also has yet to toast a foreign counterpart at a glitzy White House state dinner because he has yet to invite a world leader for a state visit. In fact, months passed before Biden was able to welcome a foreign leader to the Oval Office for even lower-key talks.
Still, the White House managed to pull off some events despite the pandemic, such as bill-signing and Medal of Honor ceremonies. The Bidens also hosted large receptions for Hanukkah and for artists recognised by the John F Kennedy Center for the Performing Arts.
But the pandemic’s biggest blow to the calendar came at Christmas, forcing the White House to overhaul its holiday entertaining — and trim the guest list.
“Anyone who knows the Bidens knows how much they enjoy hosting and celebrating the holidays,” Michael LaRosa, the first lady’s spokesperson, said in announcing a limited number of open houses for invited guests to ooh and aah over the Christmas trees and other decorations.
“It is disappointing that we cannot host as many people as the Bidens would like to, but as we have done since Day 1 of the Biden Administration, we will continue to implement strong COVID protocols, developed in consultation with our public health advisers,” LaRosa said.
In addition to fewer people passing through for the open houses, thousands of other people didn’t get a close-up look at how Jill Biden decked out White House hallways and public rooms for the holidays because public tours of the mansion remain on indefinite hold.
“The White House is never as beautiful as it is at Christmas. It’s just gorgeous,” said Jeremy Bernard, who oversaw holiday decorating and event planning as President Barack Obama’s social secretary. “It’s a shame that more people can’t go through, but it’s the reality of being in a pandemic.”
In part to make up for the lack of access, photos and an interactive tour of the decorations were uploaded to the White House website, and the first lady tweeted video of herself describing the decor and theme in each of the rooms and public spaces.
She revived the long tradition — which had lapsed under the previous administration — of opening the executive mansion for the PBS series, “In Performance at the White House.” A holiday-themed installment aired Tuesday night featuring Andrea Bocelli, Billy Porter, Norah Jones, The Jonas Brothers and others performing from different rooms in the White House.
The first lady also taped a children’s tour of the White House with characters from PBS KIDS.
In pre-pandemic times, presidents and first ladies spent many December evenings in the run-up to Christmas hosting nearly two dozen holiday parties and receptions, sometimes two per day, where they stood in line for hours posing for photos with ecstatic guests.
Eggnog and adult beverages flowed freely, partygoers piled dinner plates with shrimp and cocktail sauce, and dessert tables offered cookies decorated in the image of White House dogs — some of which were slipped into purses and pockets for the trip home.
All of that was scrapped this year.
Instead, the Bidens invited groups of up to 100 people to holiday open houses, giving them half an hour — instead of the usual two — to tour the decorations on the ground and state floors. There was no food and drink. Nor was there picture-taking with the Bidens, who didn’t attend.
Guests had to attest to their vaccination status before showing up, wear a face mask at all times on the White House grounds and practice social distancing. Anyone not vaccinated had to show proof of a negative COVID-19 test taken within 48 hours of the event.
The final open houses were held this week.
Sen Marsha Blackburn, R-Tenn, suggested on Twitter that the White House was guilty of hypocrisy with the open houses and shouldn’t have held them at all.
“The Biden White House’s decision to cancel their holiday party’ and instead hold a holiday open house’ tracks right along with the Democrats’ tendency to virtue signal while simultaneously creating loopholes for themselves,” Blackburn said in a written statement.
Jennifer Pickens, an event planner who wrote a book about Christmas at the White House, said holiday traditions can provide comfort and a feeling of normalcy, and argued that the White House should continue to welcome visitors during the pandemic.
Events “can be smaller in scale and done safely, but they need to continue,” she said in an email. Pickens said the White House is the People’s House, “so the people should be there.” (AGENCIES)