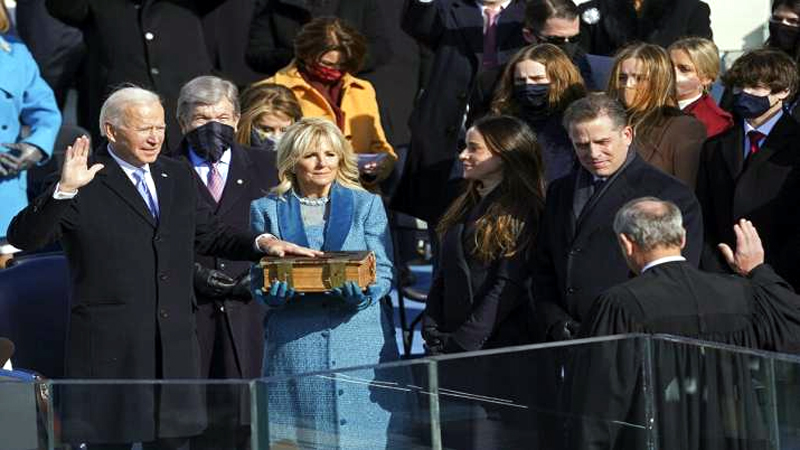 WASHINGTON, Jan 20:
Joe Biden was sworn in as the 46th President of the United States and Kamala Harris took oath as first woman Vice President today in a historic but scaled down ceremony under the unprecedented security umbrella of thousands of security personnel, who transformed the Capitol into a fortress to prevent any breach by pro-Trump extremists.
The 78-year-old veteran Democrat leader was administered the oath of office by Chief Justice John Roberts at the West Front of the Capitol – the traditional location for presidential inaugural ceremonies – where the deadly violence took place just two weeks ago.
The inauguration was held under the watch of more than 25,000 National Guards, who have transformed the capital into a garrison city, mainly because of the threat of more violent protests by the supporters of outgoing President Donald Trump, who became the first president to skip his successor’s inauguration since Andrew Johnson in 1869. Outgoing Vice President Mike Pence attended the ceremony.
Biden, who is the oldest President in American history, took the oath by placing his left hand on his 127-year-old family Bible, which was held by his wife, Jill Biden. He used the same Bible during his swearing in as vice President and seven times as senator from Delaware.
Just before Biden’s oath, his Deputy 56-year-old Harris was sworn in as 49th Vice President of the United States by Justice Sonia Sotomayor, the first Latina member of the Supreme Court, creating history as the first female, first Black and first Indian-American Vice President of the world’s oldest and most powerful democracy.
The ceremony was attended by former Presidents Barack Obama, George W Bush and Bill Clinton. Former first ladies Michelle Obama, Laura Bush and Hillary Clinton were also present.
Unlike the traditions in the past, wherein millions of people throng in the majestic National Mall from across the country to celebrate the peaceful transition of power, a hallmark of all mature democracies across the world, the 59th presidential inauguration was marred by a bitterly divided America.
Around 1,000 people attended the swearing-in ceremony, including Supreme Court Justices and members of Congress, who were limited to just one guest each due to the COVID-19 pandemic.
Biden enters the White House with the top challenge to lift the country from the devastation of a raging pandemic that has killed more than 400,000 Americans and thrown millions into economic distress. Revival of the economy, which has been badly bruised by the pandemic, is another challenge that he faces. (PTI)