E-Paper
Home Todays story BGSBU awards 16 out of 15 marks in viva to select... 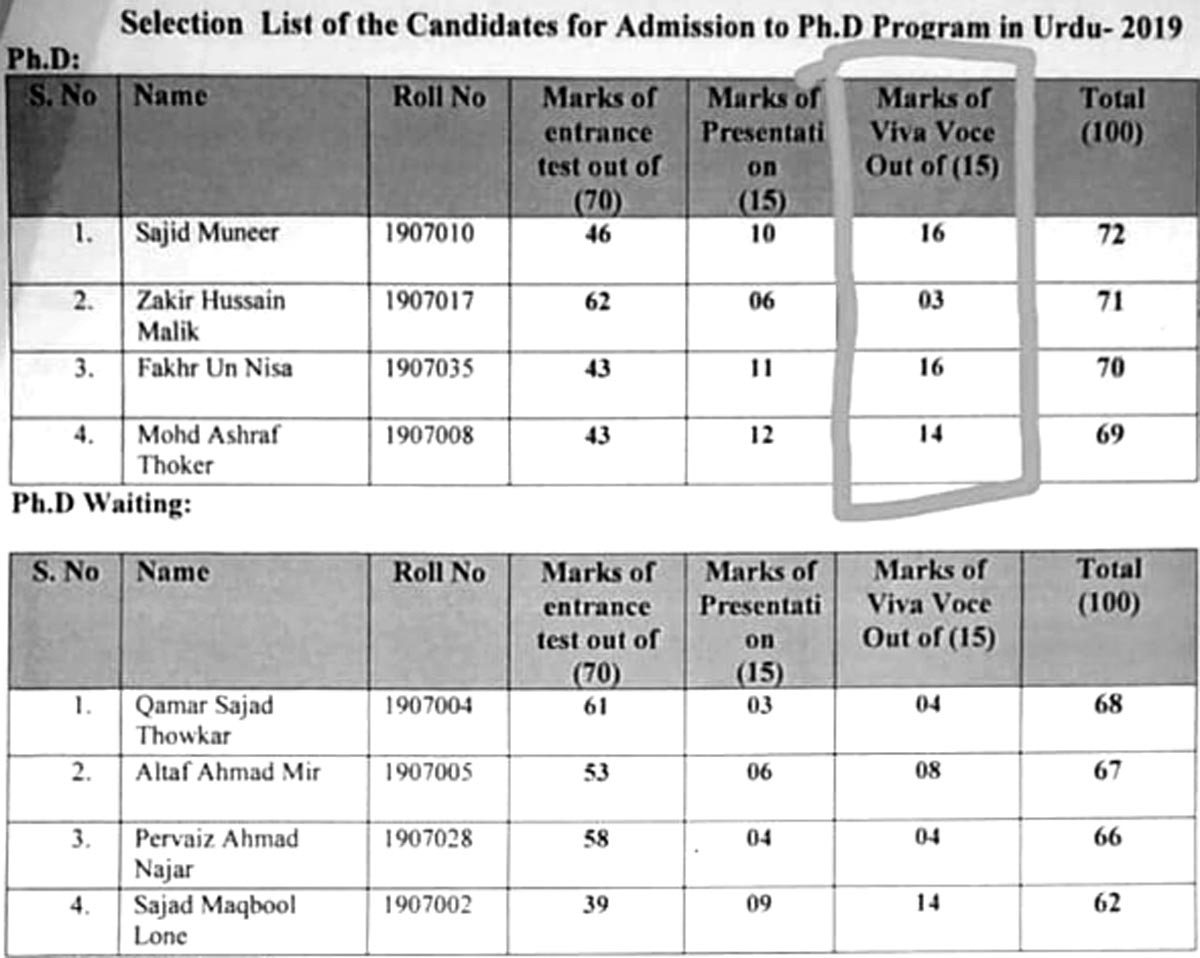 Nishikant Khajuria
JAMMU, Mar 24: Making a mockery of the system for favouring blue eyed candidates, Baba Ghulam Shah Badshah University (BGSBU) Rajouri, surprisingly awarded more than hundred percent marks in Viva Voce to the lowest scoring applicants in entrance test for admission to PhD Programme in Urdu.
As the selection list went viral on social media today, the embarrassed University administration resorted to damage control exercise and put on hold the selection of candidate claiming that there was a typographical error in the list.
In the said selection list, two candidates have been awarded 16 out of total 15 marks in the Viva Voce thus enabling them to get selected for the admission to PhD Programme even as their score in the entrance test is among the lowest.
On the other hand, the topper in the entrance test, has been awarded only three marks, lowest among all the candidates, in Viva Voce even as the Departm-ental Research Committee (DRC) could not ensure his ouster from the selection list because of his too much score in the written test.
However, the second and third highest scorers in entrance test were not fortunate enough to get selected as the DRC members awarded each of them only four marks in the Viva Voce. For the Presentation, which also has total 15 marks, these two toppers have been awarded only 3 and 4 marks, respectively.
As the selection list with marks of candidates in each category went viral on social media today inviting much humiliation to the university because of its corrupt practices, the embarrassed administration of BGSBU put on hold the selection of candidates for face saving and claimed that there was a typographical error in the list.
“With regard to the selection list of the candidates for M Phil and PhD programmes in the Department of Urdu, there was a typographical error in the list which will be rectified after due process of checking. As of now, the list has been withdrawn and the result has been put on hold. Duly checked list will be uploaded soon,” says a brief statement, uploaded on official website of the university.
Terming the university statement and action as face saving exercise, sources pointed out that the selection list was issued on March 18 and the same was put on hold on March 24 (holiday on account of Sunday) only after it went viral on the social media today.
Even if there was typographical error in awarding 16 out of 15 marks to two candidates in Viva Voce, how all the toppers in entrance test were awarded lowest in other two categories by DRC members? sources added.
Prof G M Malik was Convener of the DRC Committee while Dr Shams Kamal Anjum, Dr M A Wani, Dr Layaqat Hussain, Dr Mohd Asaf Malik and Dr Rizwan Shamsi were its members.
Pertinent to mention that selection for admission to the PhD Programme in BGSBU is made on the basis of overall merit of candidates in the written entrance test (70 marks), Presentation (15 marks) and Vice Voce (15 marks).
Since there is no scope for any irregularity in the written test, the Presentation and Viva Voce are used to influence the selection and favour blue eyed candidates as was done in this case, sources explained.