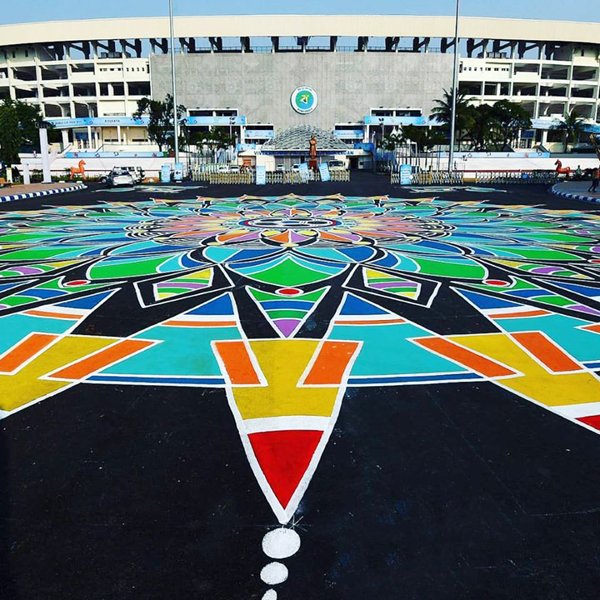 Get floored, literally, by the beauty and craftsmanship of the traditional alpana art of Bengal, which is getting a new life during public festivities like puja, and even during the recent U-17 FIFA World Cup, writes Uttara Gangopadhyay
No matter how amiably we lived round the year – ‘we’ meaning cousins of school going age – battle lines would be drawn on the days of the annual Saraswati and Lakshmi puja. Who would draw the best ‘alpana’ in front of the goddess? To keep us from fighting, our grandmother would apportion different corners to us in her thakur ghor (prayer room) which also doubled up as the temporary seat of Goddess Saraswati or Lakshmi for their respective day-long festival , so that each one could draw his or her version of the alpana. By the time the priest arrived, the entire floor would be covered in geometric and floral patterns, executed by childish hands.
This childhood memory rushed back to mind recently while watching scores of art-college students kneeling on the ground and drawing a huge ‘alpana’ on the surface of a street in Kolkata at the start of Durga Puja. Although an adaptation of the original ‘alpana’, the complete work was a pretty sight that was soon doing the rounds of social media. Kolkata witnessed again at the Salt Lake Stadium during the Under-17 FIFA World Cup football the city hosted.
Drawing auspicious motifs, especially on the floor, is a practice seen across India among various communities. Called Rangoli, Kolam, Aripana, Mandna, etc., together they form a part of the folk art genre, which preserves within a combination of religious, aesthetic and social expression.
Alpana (or ‘alpona’) is the traditional, ritualistic floor drawing, popular in Bengal. Usually, it is drawn during auspicious occasions, such as Hindu religious festivals and social occasions (barring funerary ceremonies). Although there is no recorded history of alpana, it is said that the word is derived from the Sanskrit word alimpan.
Traditionally, the drawing is done by women, using a water-based paste made from uncooked rice kernel of unprocessed sun-dried paddy, called ‘atop chaal’. Tiny pieces of clean cotton cloth or cotton ball is dipped in the paste and held in between the fingers. It is then pressed to release the liquid to draw the pattern with the finger. In its simplest form, the alpana is a freehand drawing, a mix of hollow and solid patterns drawn using lines, circles, etc. to create ornamental or geometrical shapes. Then there can be representational motifs of trees, flowers, water bodies, animals, etc.
The traditional alpana in Bengal is invariably white in colour.
As an auspicious sign, the alpana is drawn on the floor where the religious ceremony or a social function may take place, along the entrance to the house or to rooms, in the courtyard, etc. Interestingly, the alpana not only adds to the aestheticism of the occasion but can also be a record of social history.
During the autumnal Lakshmi Puja, the festival honouring the goddess of wealth, women not only draw ornamental patterns, motifs representing owls (the mount of the goddess), lotus, etc. but also rows of a pair of tiny feet with a wavy line in between. The wavy line is representative of the paddy stalk. For a traditionally agrarian society, a good harvest of paddy is considered wealth.
Like any other folk art form, there is no formal training for drawing alpana. It is a tradition that has been passed on from one generation of women to the next. Although much later one could find albums containing intricate motifs for alpana being sold at the Calcutta Book Fair.
Unfortunately with urbanisation setting in, the alpana, like many other traditional aspects, has taken a back seat. Besides, the concept of colourful Rangoli has also influenced the alpana, and it may not be only-white anymore. Few people are interested in the back-breaking and time-consuming task of drawing the motifs with cotton ball brush. So use of paint brushes and commercial colours have crept in. Nowadays, many urban homes prefer to buy the sticker sheets with intricate designs and use them in the place of hand-drawn alpana.
While the concept of alpana is still largely enmeshed in religious sentiments, Shantiniketan – the place coloured by the memories of Rabindranath Tagore – was the first to liberalise it. Students of Shantiniketan still draw elaborate alpana during their social functions and festivals.
While alpana as street art has given a new twist to the traditional art form, it is also necessary to preserve the original art form. INTACH and Daricha Foundation have joined hands to revive the alpana as part of its efforts to preserve the folk arts of India, according to media reports. Rabi Biswas of Nadia, who initially learned the art from his grandmother, is also researching on the subject and has been collecting the motifs associated with the ‘broto’ observations. With efforts such as these, one can only hope that this traditional folk art form will not be lost for posterity.
Trans World Features