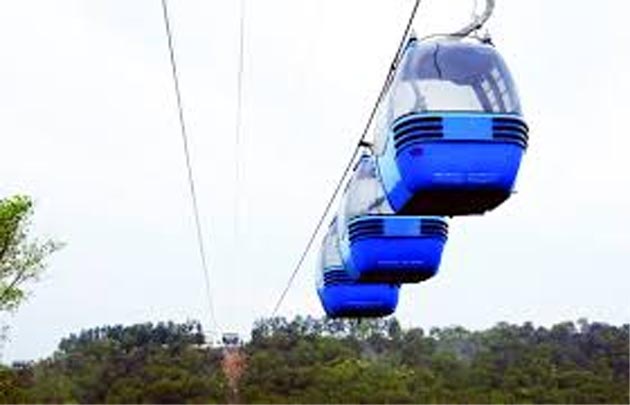 After running into phases of many hiccups, Bahu-Mahamaya section of Jammu Ropeway has finally been declared complete in all respects as it was inaugurated by the Lieutenant Governor on July 27. This much hyped project costing around Rs. 34 crore has with it ancillary features of attraction and facilities like walkways, restaurant, lawns, gender based public utilities , a park at Mahamaya, sufficient parking place at Bahu and wooden decks etc. In other words, a visit to the Ropeway site both at originating and culminating points , one would find reasonably sufficient avenues to pass many hours enjoying scenic beauty of the lush green surroundings and experiencing novel feelings .As expected, this ropeway was going to add lustre into the fun, frolic and joy of the users of the cable car and become one of the prominent features and focal point in Jammu to interest visiting tourists.
We appreciate the gesture of the Lieutenant Governor in asking the cable operators to keep the ride free of cost for the public for the first fifteen days of its throwing open to be operated . It was also decided to have the senior citizensand students avail the enthralling ride at concessional rates and constructing a gaming zone for kids. That would not only popularise the cable car ride among the people between the two famous spots of historical and scenic importance of Jammu but also prove as a sort of insulating factor against the initial hesitation to take the ride keeping in view the unfortunate incident of a mock rescue drill days before the Ropeway was to be inaugurated by the Prime Minister last year in which two labourers were killed and four others suffered injuries after one of the trolleys got imbalanced . That , happening prior to inauguration due to a technical snag , however, are rarest of exceptions and all security and safety measures have reportedly been taken care of. Lieutenant Governor,GirishChanderMurmualso directed the concerned officers present at the occasion to immediately formulate a SOP for periodic maintenance of the machinery which is too important a factor to be ignored to keep the machinery free of any snags or troubles.
This facility at Jammu would attract a large number of pilgrim tourists as the said facility connects the three major temples of Jammu city, the Peerkho temple, Mahamaya temple and Bahu Fort temple . Since the much hyped artificial lake project in Jammu with a lot of promise of tourism and recreational facilities has been confronting series of setbacks and has been crossing timelines of completion again and again, at least, this Ropeway project now complete in all ways, was going to provide some sort of tourists and general public related recreational facilities and create opportunities in its own realm for some commercial and economic activities too. Every opportunity related to exploring commerce and generating economic activity must be fully utilized which was need of the hour and tourism related enterprises are best viable ones to make investments in.