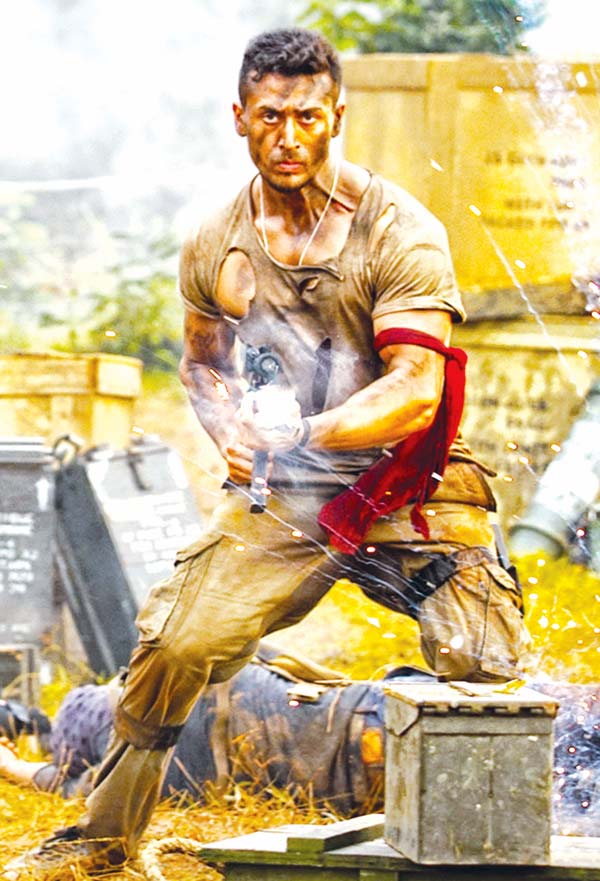 Action has been the mainstay of Bollywood flicks and it’s as important as song and dance. Although action flicks have been churned regularly by Bollywood, there are not many current actors who come under the category of action stars. At such point, Tiger Shroff came as a breath of fresh air. Action is his USP and the manner in which he beats up the baddies is quite entertaining. Tiger has become a darling of the masses and one of the big reasons why that happened was thanks to his second film BAAGHI [2016]. Now it’s second part, BAAGHI 2, has released in cinemas. So does it go beyond the first part and emerge as a great action entertainer? Or does it fail to entice? Let’s analyse.
BAAGHI 2 is the story of a fearless rebel who undertakes a dangerous mission when his ex-girlfriend seeks his help. Ranveer Pratap Singh (Tiger Shroff) is a brave army officer. One day he gets a call from his ex-girlfriend Neha (Disha Patani). She asks for his help in finding her daughter Rhea who got kidnapped two months ago. Ranveer begins his investigation but hits a dead-end soon enough. Nobody is a witness to the kidnapping. Some even claim that Neha never had a daughter. Neha’s husband Shekhar (Darshan Kumaar) also confirms this fact. He adds that Neha is suffering from posttraumatic stress disorder due to which she is imagining her daughter getting kidnapped. Ronnie confronts Neha over this revelation but she remains adamant. Ronnie refuses to believe, prompting Neha to take a shocking step, which devastates Ronnie. What happens next forms the rest of the film.
BAAGHI 2 begins on a thrilling note. Ronnie’s entry as expected is quite clapworthy. One expects fireworks as soon as he lands in Goa to find the missing Rhea. Sadly, two songs are placed almost back to back. This dilutes the impact a bit. But the action scene in the police station brings the film back on track. A sea of characters are then introduced in the next 30-40 minutes and they add a lot of weightage to the narrative. Thankfully, each one of them are there for a reason. There’s also unpredictability in the plot, which makes for a good watch. But the film suffers due to lack of logic. Also, the fights are hardly there before the interval. The second half has more action sequences and this would surely impress the masses. At the same time, the emotional quotient comes out well. The climax has a high dose of fights and the final scene of the film is lovely.
BAAGHI 2 is adapted from a Telugu film KSHANAM by Sajid Nadiadwala and the plot is very weak. Although one is not supposed to look for logic in masala films, the level of absurdity in this flick is too high. Jojo Khan, Abbas Hierapurwala and Niraj Mishra’s screenplay is twisted for no reason and is devoid of logic. In the climax, it gets a bit haywire during the flashback. It might be difficult for some viewers to guess what exactly happened. Hussain Dalal’s dialogues are quite massy and whistle inducing. Ahmed Khan‘s direction is quite an improvement as compared to his previous attempts. He still falters in a lot of scenes but overall he manages to execute the film in a neat and simple manner.
Coming to performances, Tiger Shroff delivers a terrific performance and enters successfully in the intense zone. It’s great to see how he’s able to look agitated and at the same time quite vulnerable. His action and dance as expected makes for ‘paisa vasool’ fun. Disha Patani sadly has lesser screen time and she surely has a long way to go when it comes to her performance. Her chemistry with Tiger however is good. Manoj Bajpayee (Ajay Shergill) gives a nice, subtle performance as per his character’s requirement. Randeep Hooda (Lodha Singh Dhul aka LSD) gets to essay the most colourful character in the film and he’s too good. Viewers are sure to go crazy after witnessing his antics. Prateik Babbar (Sunny) gets into the skin of his character. Deepak Dobriyal (Usman) leaves a mark with his performance and one-liners. Grandmaster Shifuji Shaurya Bharadwaj (Colonel Ranjeet Walia) is quite a livewire but sadly this time he doesn’t have much to do. Darshan Kumaar (Shekhar) is quite okay while Sunit Morarjee (Sharad Kute) goes overboard. Jacqueline Fernandez is quite sizzling in her item number.
The Songs are strictly okay but barring the item number, the rest don’t make the desired impact. ‘Mundiyan’ is forced but is quite peppy. ‘Ek Do Teen’ is energetic, ‘O Saathi’ is lovely while ‘Lo Safar’ is wasted. Julius Packiam’s background score is quite impactful.
Santhana Krishnan Ravichandran’s cinematography is eye catching. The aerial shots especially are quite well captured. Ram Chella, Lakshman Chella, Kecha Khamphakdee and Shamshir Khan’s action is quite entertaining and the mainstay of the film. Rameshwar Bhagat’s editing is okay and the film could have been shorter. Laxmi Keluskar and Sandeep Meher-Lasa’s production design is rich.
On the whole, BAAGHI 2 boasts of an extraordinary action and spectacular performance from Tiger Shroff with an absence of a convincing and engaging screenplay as a minus point. At the box office, it will score huge over the weekend in the mass dominated circuits. However the real test for the movie will begin from Monday onwards.
Courtesy : http://www.bollywoodhungama.com