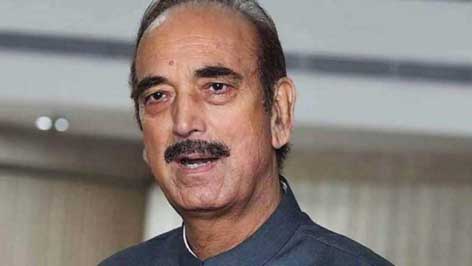 JAMMU, Feb 14: Leader of Opposition in Rajya Sabha and former Union Health Minister, Ghulam Nabi Azad today requested Union Home Minister, Amit Shah to amend SRO-202 issued by J&K Government during 2015 and sought additional funds from the Union Health Ministry for the early completion of five Medical Colleges sanctioned for J&K during his tenure as Health Minister.
In a letter written to the Home Minister, Azad pointed out that notification/ SRO-202 was issued by the General Administration Department of J&K Government on June 30, 2015, notifying Jammu and Kashmir Special Recruitment Rules 2015. He said these rules prescribed that a person shall be on a probation of 5 years and during this period, the appointee shall be entitled to only the basic pay and not any of the allowances.
Azad pointed out that the standard recruitment rules only provide for 2 years of probation and thus this provision in the SRO 202 of J&K is discriminatory. Denial of due increment to such employees will have detrimental effect on the service and pension of the appointees and will lead to pay anomaly in future.
Azad said the application of these rules since 2015, is causing a great unrest among the youth and Govt employees of J&K. ” It is therefore, requested that you may kindly look into the matter and get the rules appropriately amended so that the newly appointed employees of Jammu and Kashmir Govt are not placed at the disadvantageous position,” Azad wrote.
Meanwhile, Azad in yet another letter written to the Union Health & Family Welfare Minister, Dr Harshvardhan has requested to sanction additional funds for the five Medical Colleges sanctioned during his tenure at Kathua, Rajouri, Doda, Anantnag and Baramulla in J&K.
He said Union Ministry sanctioned two Medical Colleges for Leh and Udhampur on Oct 4, 2019 with the cost of Rs 325 crores each, whereas, five Medical Colleges during his tenure had been sanctioned with the estimated cost of Rs 189 crores each. Due to the delay on the project and the passage of time, there has been cost escalation in the project and more over, the colleges could not be completed till today due to paucity of funds. He requested the Union Health Minister to provide additional funds so that work could be completed at the earliest on these five Medical college projects in J&K.