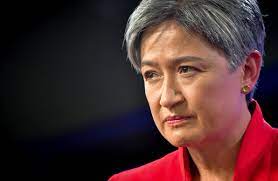 13Canberra, July 12:Australia’s foreign minister on Tuesday urged Pacific island neighbours to unite on their shared challenges of US-China strategic competition, climate change and COVID-19.
Foreign Minister Penny Wong addressed reporters in the Fijian capital Suva ahead of a leaders’ summit of the Pacific Islands Forum.
She said Pacific leaders have talked with her about the challenges of climate change and COVID-19 — “which have fallen harder on this region than on many other parts of the world and, of course, strategic competition,” Wong said.
“All the nations are seeking to navigate those challenges. And we do it best when we can do it together,” she added.
Australia and New Zealand are the wealthiest forum nations and share a concern over a security pact signed this year between China and the Solomon Islands.
The Micronesian state of Kiribati has reportedly split from the 18-nation body in a major blow to regional unity.
Wong said the “door remains open” to Kiribati returning.
Both the Solomon Islands and Kiribati recently changed their diplomatic recognition from Taiwan to Beijing. Kiribati’s withdrawal from the forum is being interpreted as a deepening of China’s influence in the region.
New Zealand Prime Minister Jacinda Ardern, who arrived Monday in Fiji, described Kiribati’s withdrawal as “disappointing.”
Australian Defense Minister Richard Marles said in a speech in Washington, D.C., that Australia and the Unites States will need to do more to counter a growing number of threats in the Indo-Pacific region.
He said China’s rise had complicated issues across the Pacific and that Australia and the United States would have to work more closely together in coming years.
“We can’t afford to stand still, because in the years ahead the U.S.-Australia alliance will not only have to operate in a much more strategic environment in the Indo-Pacific, it will need to contribute to a more effective balance of military power aimed at avoiding a catastrophic failure of deterrence,” Marles said.
Australian Prime Minister Anthony Albanese, who will travel to Fiji on Wednesday, said his government was committed to spend at least 2% of Australia’s gross domestic production on defense.
“National security and our security in the Indo-Pacific is about more than just defense spending. And tomorrow I’ll be traveling to the Pacific Islands Forum, where our neighbors in the Pacific understand that climate change is a national security issue,” Albanese said in Sydney.
“Indeed, they regard — just as the United States does — as it being at the center of national security and I look forward to the discussions that I’ll have with the leaders in the Pacific,” Albanese added.
Albanese’s government was elected in May with a promise to reduce Australia’s greenhouse gas emissions by 43% below 2005 levels by 2030.
The previous government only committed to reducing emissions by 26% to 28% by the end of the decade.
Due to the pandemic, the Suva summit will be Pacific leaders’ first opportunity for face-to-face meetings since 2019 when the forum met in Tuvalu.
In May, China fell short on a bold plan to have 10 Pacific nations endorse a sweeping new agreement covering everything from security to fisheries as some in the region expressed deep concerns. But there were plenty of smaller wins for China’s Foreign Minister Wang Yi during his island-hopping tour of the region.
Wang was in Fiji on May 30 to co-host a key meeting with the foreign ministers from the 10 island nations. At an unusual news conference afterward, Wang and Bainimarama spoke for about 30 minutes and then abruptly left the stage as reporters tried to shout out questions. That left many details of what transpired at the meeting unanswered.
It was clear the nations hadn’t endorsed China’s plan. But Wang managed to sign smaller bilateral agreements with the Pacific nations during his tour. (AP)