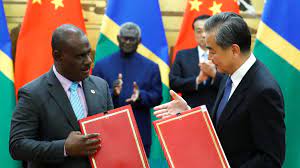 Wellington, Jun 2:Australia and China continued their tit-for-tat diplomatic rivalry in the Pacific on Thursday as the foreign ministers from each country paid separate visits to island nations.
In Samoa, Australia’s Foreign Minister Penny Wong announced that her country would donate a patrol boat to replace a similar one that was wrecked after it ran aground last year.
Meanwhile, China’s Foreign Minister Wang Yi visited Papua New Guinea to meet with leaders there on the penultimate stop of an eight-nation regional tour.
Wang had hoped to ink an ambitious multilateral deal with 10 South Pacific nations this week covering everything from security to fisheries. He couldn’t find consensus on that deal but has been notching up smaller wins by signing bilateral agreements with many of the countries he’s been visiting.
The diplomatic push by China, especially around Pacific security, has caused deep concern among some of the island nations as well as farther afield in Canberra and Washington. Since news of the proposed deal emerged, Wong has made two trips to the Pacific to shore up support for Australia.
In Samoa, Wong met with Prime Minister Fiame Naomi Mata’afa.
Wong told reporters that Australia respected the right of sovereign nations to make their own security decisions, but said those decisions “have the potential to affect the nature of the security arrangements of the region. So having a collective consideration of those matters is important”.
Fiame said she wanted to make clear that while Samoa had signed some bilateral agreements with China, it hadn’t favoured inking the big multilateral deal — at least not right away. She said Samoa and the other nations needed to talk through the issues first.
“Our position was that you cannot have regional agreement when the region hasn’t met to discuss it,” she said.
Fiji’s Prime Minister Frank Bainimarama has been even more blunt, tweeting: “The Pacific needs genuine partners, not superpowers that are super-focused on power.”
Wang’s visit to Papua New Guinea comes ahead of a national election there next month.
Wong will next visit Tonga while Wang plans to end his tour with a stop in East Timor. (AP)