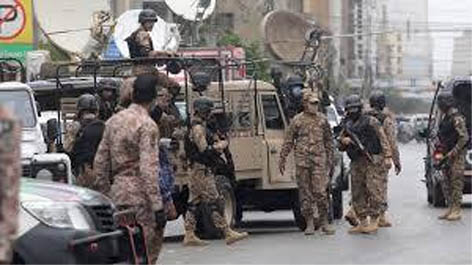 A banned Baloch terror group conducted an attack on Pakistan Stock Exchange at Karachi in the city’s high security commercial hub , in a bid to take it over. This attack carried on by four armed militants resulted in the death of four of the security guards and a police officer before they were shot dead by the government forces. However, the attack caused a lot of panic in the area.
The police version had it that the heavily armed militants intended not only to enter the building but also carry out violence and hold people as hostages. However, Balochistan Liberation Army (BLA) linked Majid Brigade claimed responsibility of the attack and the latest one was not the first but several of such attacks have been carried out by the BLA in the past also including a suicide attack in August 2018. Analysts account for such attacks as the high level human rights abuses in Balochistan by Pakistani military and para- military forces, persecution of innocent citizens, men , women and young students. There have been enforced disappearances of hundreds of nationalists and activists . Majority of Baloch people, therefore, want independence from Pakistani “occupation” of Balochistan . However, terror and violence of any kind can only be condemned.