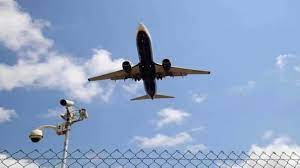 New Delhi, Feb 16: Jet fuel prices on Wednesday soared to record high levels across the country after rates were increased by 5.2 per cent in line with a rise in international oil prices.
This is the fourth hike in jet fuel or Aviation Turbine Fuel (ATF) prices in less than two months following a spike in global oil prices but petrol and diesel prices remained unchanged for a record 103rd day in a row, coinciding with electioneering to elect new governments in states like Uttar Pradesh and Punjab.
ATF price was hiked by Rs 4,481.63 per kilolitre or 5.2 per cent to Rs 90,519.79 per kl in the national capital, according to a price notification of state-owned fuel retailers.
This is the highest ever price touched by ATF. The rate is higher than Rs 71,028.26 per kl reached in August 2008 when international crude oil prices touched USD 147 per barrel. Brent crude oil on Tuesday was trading at USD 93.87 per barrel.
The increase in price will put pressure on the already strained balance sheets of airlines that are yet to resume full operations due to pandemic-related restrictions.
Wednesday’s price increase is the fourth hike this year. Rates were hiked by Rs 2,039.63 per kl or 2.75 per cent to Rs 76,062.04 per kl on January 1 and then again by Rs 3,232.87 per kl (4.25 per cent) to Rs 79,294.91 per kl on January 16. They went up by Rs 6,743.25 per kl or 8.5 per cent to Rs 86,038.16 on February 1.
With four hikes, ATF prices have gone up by Rs 16,497.38 per kl.
These hikes in the rate came on the back of two rounds of price cuts seen in December that reflected a drop in international oil prices during the second half of November and mid-December.
Thereafter, international rates have firmed up, leading to the hike in ATF prices.
ATF prices had last peaked at Rs 80,835.04 per kl in mid-November 2021 before it was cut on December 1 and 15 by a total of Rs 6,812.25 per kl or 8.4 per cent.
Jet fuel prices are revised on the 1st and 16th of every month based on the average price of the international benchmark in the preceding fortnight.
Unlike ATF, petrol and diesel rates are revised daily after taking the average price in the preceding fortnight. But prices have remained unchanged since November 4, 2021, when the central government had cut excise duty on petrol by Rs 5 per litre and that on diesel by Rs 10 a litre.
This is despite a wild swing in international oil prices. Brent crude oil, the best-known international benchmark, was at USD 82.74 per barrel on November 5, 2021, before it started to fall and touched USD 68.87 a barrel on December 1.
Prices have climbed since and are now near USD 94, well above the peak of US$86.40 touched on October 26, 2021, which had led to petrol and diesel prices spiking to an all-time high.
Petrol costs Rs 95.41 a litre in Delhi and diesel is priced at Rs 86.67, price information from state fuel retailers showed.
Before the excise duty cut, petrol and diesel prices had touched an all-time high across the country. While petrol had crossed the Rs 100 a litre mark in most cities, diesel was above that level in nearly half the country.
In Delhi, petrol was Rs 110.04 a litre and diesel was Rs 98.42.
Prices had eased from an all-time high on November 4, 2021, after the Union government had cut excise duty on petrol by Rs 5 per litre and diesel by Rs 10 a litre.
States had also cut local sales tax or VAT on the two fuels — BJP-ruled states on the same day and some others at differing dates thereafter. But other than these two, the basis rates have remained unchanged. (PTI)