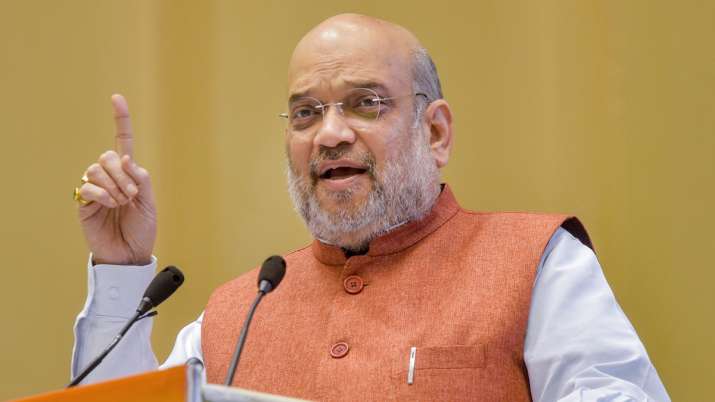 JAMMU, Feb 21: In a significant statement, Union Home Minister Amit Shah today announced that Assembly elections in Jammu and Kashmir will be held within six to eight months after completion of the Delimitation Commission exercise.
The statement assumed significance as the Delimitation Commission has submitted its draft report to five Associate Members who have also filed objections/suggestions and now the report has to be put in public domain for claims and objections by political parties, organizations and individuals. Going by the process, the delimitation process could be over in next two-three months.
In an interview to Network18 TV Group which was telecast this evening, Shah said the Assembly elections in Jammu and Kashmir will be held within six-eight months of the completion of delimitation exercise which is about to get over.
“There is no confusion,” he added.
Extended term of the Delimitation Commission is ending on March 6 and there were reports that the Panel could get extension of two to three months. If the Commission submits report in June, going by Shah’s statement, the Assembly elections in Jammu and Kashmir can be held either in November-December this year or March-April next year.
It may be mentioned here that 2008 and 2014 Assembly elections in Jammu and Kashmir were also held in the months of November-December.
Jammu and Kashmir is without an elected Government since June 19, 2018 i.e. for last more than three and half years when BJP had withdrawn support to Mehbooba Mufti-led PDP-BJP coalition Government leading to imposition of Central rule in the State which was later bifurcated into two Union Territories of J&K and Ladakh and its special status withdrawn on August 5, 2019.
To a question on Pakistan Prime Minister Imran Khan’s recent statement that India and Pakistan should resolve their issues together especially Kashmir, the Union Home Minister said there is no point of discussion as Kashmir is an integral part of India.
“This is the position taken by all Governments in Parliament. This is the country’s position,” Shah said.
He lambasted the statement of Congress leader Rahul Gandhi made in Parliament recently that Narendra Modi Government’s Kashmir policies have brought Pakistan and China closer.
“Narendra Modi Government has given befitting reply to every challenge posed by China,” Shah said, adding that Rahul Gandhi doesn’t know history of the country and what happened in 1962 and because of whom.
Gandhi had made the statement in Lok Sabha on February 3 during debate on the Motion of Thanks to the President’s address.
“The Narendra Modi Government has protected the borders and sovereignty of the country. I don’t think these kind of statements about neighbouring countries should be made by any national leader,’’ Shah said and added he wants to ask Rahul that he said all this in Parliament, but he broke all protocols to meet a Chinese delegation.
“What did you discuss with them? Such statements show there is a dearth of serious politicians,” Shah said.
Replying to a question on controversy over wearing of Hijab in educational institutions which surfaced in Karnataka and later spread to some other places also, the Union Home Minister said this was his personal opinion that school dress code should be followed by students of all religions.
On the outcome of Uttar Pradesh Assembly election results, Shah expressed confidence that the BJP is going to form Government with big majority.
The Home Minister also hit out at the SP and BSP for withdrawing UAPA (Unlawful Activities Prevention Act) and POTA (Prevention of Terrorism Act) cases during their respective tenures.
“The law and order issue is important. And now PM Modi has also spoken on terrorism. He spoke in Hardoi on the Ahmedabad blast case in which 38 accused have been sentenced to death. He said these terrorists were freed from jail during SP regime. Eleven such instances took place during the SP and BSP eras when UAPA and POTA cases were withdrawn. What do SP and BSP have to say about security in the country? They will have to give answer to the public,” Shah said.