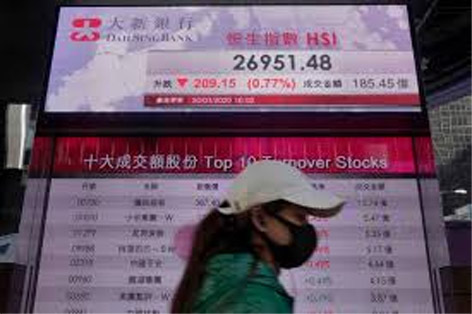 Hong Kong, Feb 21: A spike in new virus cases outside China spooked Asian markets Friday after Wall Street pulled back from record highs as more companies warned earnings could be hurt by the epidemic.
More than 2,200 people have died from the novel coronavirus, which has infected over 75,000 people, mostly in China, and spread panic around the world.
While Beijing claims its epidemic control efforts are working, the rising death toll and number of new infections abroad have rattled investors.
A batch of warnings from companies over the impact of the virus on bottom lines — including Danish ship operator Maersk and Air France-KLM — and weaker manufacturing data in Japan also fanned anxiety.
Initial hopes that the virus would have only a short-term impact on earnings and economic growth have given way to the reluctant realisation that it could linger.
“It took Apple to do what the coronavirus couldn’t — make stocks feel a little queasy,” said Stephen Innes of AxiCorp, referring to the tech giant’s warning Monday that it would miss its quarterly revenue forecast because of the disease.
“The market seemed to absorb the initial Apple shock in its typically pleasant manner, but it’s the aftershocks when corporate America starts waving the warning flags in tandem that could prove to be the biggest gut check.”
Seoul’s Kospi index fell 1.5 per cent. The country confirmed 48 more virus cases on Friday afternoon, adding to the 52 it announced in the morning, taking its total to 204.
Japan’s benchmark Nikkei 225 index closed down 0.4 per cent as investors took to the sidelines ahead a long weekend.
Mainland China’s key Shanghai Composite Index closed up 0.3 per cent following central bank efforts to cushion the impact of the virus on the world’s second-largest economy, where manufacturing activity has been hit hard.
Elsewhere, Sydney, Taipei and Singapore all shed 0.3 per cent.
China reported Thursday a big drop in the number of new infections after it once again changed the method of counting patients with the virus.
It was the second revision of criteria in just eight days and the flip-flopping “did not help the mood” of investors, noted Rodrigo Catril of National Australia Bank.
The National Health Commission reported 889 new cases on Friday, up from the previous day.
After the losses on Wall Street and in Europe, Jeffrey Halley of OANDA likened the reaction on Asian markets to “more a case of the sniffles, rather than a full-blown cold”.
But he said company warnings “could turn into a flood” if the virus crisis continues for the rest of the first quarter and extends into the next.
European markets opened in the red Friday, with London’s FTSE 100 down 0.5 per cent, the Paris CAC off 0.7 percent and Germany’s DAX 0.5 per cent lower.
Demand for gold, which is considered a safe haven in times of uncertainty, has benefited from the spreading virus as investors reduce their risk exposure.
China is the world’s biggest importer and consumer of oil — and prices have been particularly sensitive to the epidemic affecting dozens of countries and territories.
Both main contracts were lower on demand fears, with Brent Crude off 1.6 per cent and West Texas Intermediate down 1.4 percent. (AGENCIES)