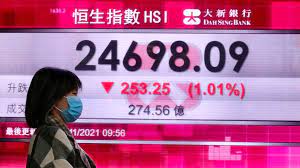 Tokyo, Nov 24: Asian shares fell Wednesday as worries about inflation set off expectations the U.S. Federal Reserve might raise interest rates.
Japan’s Nikkei 225 dropped 1.1% to 29,436.73 in early trading, following a national holiday Tuesday. South Korea’s Kospi slipped 0.3% to 2,988.40. Australia’s S&amp;P/ASX 200 edged down nearly 0.1% to 7,403.30. Hong Kong’s Hang Seng shed 0.3% to 24,588.48, while the Shanghai Composite fell 0.4% to 3,575.93.
“Markets continue to shift their expectations toward a tighter Fed monetary policy,” said Yeap Jun Rong, a market strategist at IG, adding that investors will be watching for U.S. Data being released later in the day.
The Fed will release minutes later in the day from its October policy meeting, potentially giving investors more details on the central bank’s plan to start trimming bond purchases that have helped keep interest rates low.
Investors have been watching to see if pressure from rising inflation will goad the Fed into speeding up its plans for trimming bond purchases and raising its benchmark interest rate.
Wall Street closed out a wobbly day of trading, as gains in banks and energy companies tempered losses elsewhere in the market. The S&amp;P 500 managed to rise 0.2% to 4,690.70 after wavering between small gains and losses for much of the day.
The Dow Jones Industrial Average rose 0.5% to 35,813.80, while the Nasdaq composite closed 0.5% lower, at 15,775.14. Small company stocks also lost ground. The Russell 2000 index fell 0.1% to 2,327.86.
More than 60% of the stocks in the S&P 500 rose. Gains in banks, energy stocks and household goods companies were tempered by losses in technology and communication stocks, and a mix of companies that rely on consumer spending.
Retailers were mixed ahead of the official start of the holiday shopping season. Discount retailer Dollar Tree jumped 9.2% for the biggest gain in the S&P 500. Starbucks rose 1.9%. Best Buy slumped 12.3%, the biggest drop in the S&P 500, as concerns about tighter margins outweighed solid earnings.
Technology and communications companies also weighed on the broader market. Adobe fell 1.3% and Intel dropped 1.5%.
Zoom Video sank 14.7% a day after the video conferencing company reported that its third-quarter revenue growth slowed.
The yield on the 10-year U.S. Treasury rose to 1.68% from 1.63% late Monday, but fell to 1.65% by midday Wednesday in Asia.
The price of U.S. Crude oil rose 2.3% and wholesale gasoline rose 3.4% on Tuesday after President Joe Biden ordered 50 million barrels of oil released from the nation’s strategic reserve to help bring down energy costs. The move was made in concert with other big oil-consuming nations, including Japan.
Although Japan’s overall data has not shown an inflation problem on the scale of other nations, critics say it’s just not as blatantly visible, in sectors slammed by soaring energy prices, from businesses that rely on fuel to plastic bags that are a petroleum product.
The release of the oil reserves may not necessarily bring down oil prices, but analysts say it may serve as a message to OPEC.
In energy trading, benchmark U.S. Crude rose 5 cents to $78.55 a barrel. Brent crude, the international standard, shed 21 cents to $81.12 a barrel.
Stocks are likely to see more mixed trading this week, with U.S. Markets closing on Thursday for Thanksgiving and then closing early on Friday.
Wall Street will get a few pieces of economic data on Wednesday that could give investors a better sense of the economic recovery’s pace and breadth. The Labor Department will release its weekly report on unemployment benefits. The Commerce Department releases data on third-quarter gross domestic product and its new home sales report for October.
In currency trading, the U.S. Dollar fell to 115.09 Japanese yen from 115.15 yen. The euro cost $1.1236, down from $1.1249. (AGENCIES)