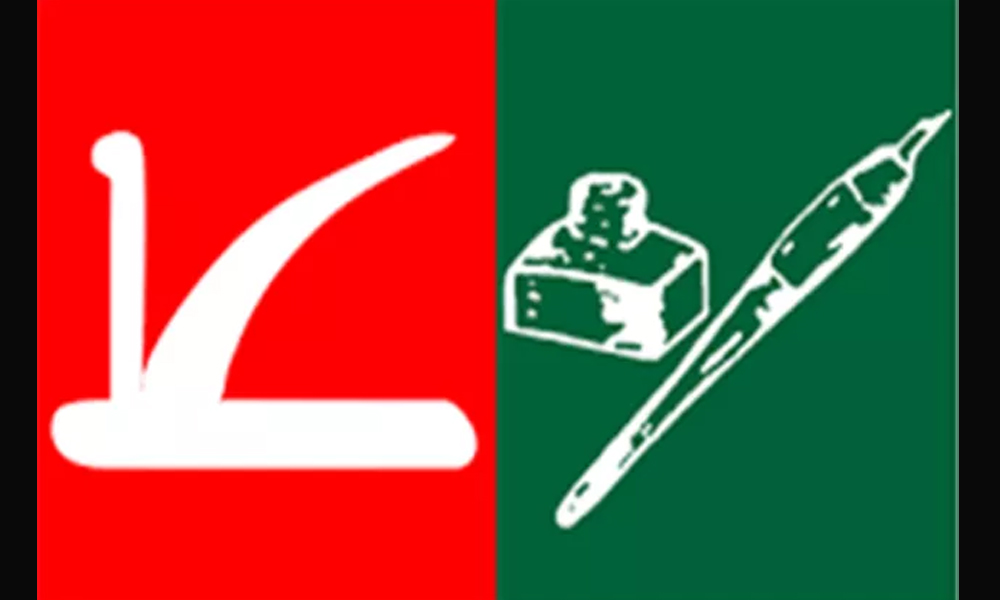 7 in fray, multi-cornered contest on cards
BJP lines up Rajnath, Gadkari for campaign

Sanjeev Pargal
JAMMU, Apr 20: Fast changing political equations in Ladakh Parliamentary constituency have also cast shadow over Ladakh Autonomous Hill Development Council (LAHDC), Kargil, where National Conference was heading the minority Council while four-cornered contest on the seat was imminent as consensus eluded two powerful religious organizations of Kargil to field unanimous candidate.
With National Conference and People’s Democratic Party (PDP) backing Islamiya School Kargil (ISK) candidate Sajjad Kargili and Congress leader Haji Asgar Ali Karbalaie joining the fray as Independent with the backing of Imam Khomeini Memorial Trust (IKMT), threat looms large over the LAHDC Kargil, which was headed by National Conference in coalition with the Congress and backing of some Independents.
In 26-member LAHDC Kargil, which is headed by National Conference leader Feroz Khan as Chairman-cum-CEC, National Conference has 10 members and Congress 8. PDP has two Councilors and BJP one while five others are Independents. Four Nominated Councilors don’t have the voting rights though they take strength of the local Government to 30.
Besides Chairman, NC has one Executive Councilor while Congress has two Executive Councilors. Fourth Executive Councilor is an Independent.
Sources said since National Conference will be backing Sajjad against Karbalaie, it would be difficult, though not impossible, for NC and Congress to share power in the local Government.
LAHDC Kargil Chairman-cum-CEC Feroz Khan told the Excelsior that since Karbalaie is contesting the election as an Independent and Rigzin Spalbar is official candidate of the Congress, the Council might not face any major threat during Parliamentary elections.
However, sources said, the National Conference was ready to face any kind of situation and for the purpose, was trying to woo four out of five Independent Councilors to ensure majority for itself even if the Congress withdraws support to the Council.
National Conference and Congress had joined hands to form the Council due to fractured mandate. Karbalaie holds considerable influence in the Congress as well as the Council in Kargil.
Meanwhile, though seven candidates were today left in fray for Ladakh seat after rejection of nomination papers of Dorji Angchuk, who was covering candidate of the BJP, during scrutiny, political observers believed that the contest would be confined to four candidates including Jamyang Tsering Namgayal of BJP, who happens to be the Chairman-cum-CEC LAHDC, Leh, Rigzin Spalbar (Congress), Sajjad Kargili and Haji Asgar Ali Karbalaie (both Independents).
Three other candidates in the fray included Kacho Mohammad Feroz, Asgar Ali and Tsering Namgayal, all Independents.
April 22 is last date for withdrawal of nomination papers while polling for Ladakh seat will be held on May 6 in fifth phase.
BJP candidate and LAHDC Leh Chairman-cum-CEC Jamyang Tsering Namgayal is banking heavily on the support of people following divisional status and University granted to Ladakh besides increasing powers of the Councils and other developmental works while the Congress is trying to cash what it called “anti-incumbency factor” against the BJP.
Karbalaie and Sajjad Kargili were set to bank on the issues of Kargil district and support of IKMT and ISK respectively besides other groups.
Legislative Council Chairman and PDP leader Haji Inayat Ali told the Excelsior that his party was not supporting National Conference but the ISK backed candidate Sajjad Kargili.
National Conference district president, Haji Hanifa Jan said their party and PDP were supporting Sajjad to defeat Karbalaie, who, he claimed, has done nothing for Kargil and only exploited the people for vested political interests.
“Karbalaie is hindrance in the unity of Kargil. He will be taught a lesson by the people,” Jan said, adding the NC decision to support Sajjad has backing of top leadership of the party.
Karbalaie was not available for comments.
BJP had won Ladakh seat in 2014 elections with its candidate Thupstan Chhewang scrapping through with just 36 votes defeating Independent and Congress rebel, Ghulam Raza from Kargil. However, Chhewang had resigned from the BJP and also quit the Lok Sabha membership last year. In fact, he has resigned from the politics and is not active in the present elections.
BJP sources said Union Home Minister Rajnath Singh, Union Surface Transport Minister Nitin Gadkari, Union Minister of State for Home, Kiren Rijiju and Union Minister of State for Minority Affairs Mukhtar Abbas Naqvi were likely to campaign for the BJP candidate in Ladakh.
Leader of Opposition in Rajya Sabha and former Chief Minister, Ghulam Nabi Azad is expected to campaign for the Congress candidate.
In the dissolved Assembly, Congress had three out of four Assembly seats from Ladakh including Leh, Nubra and Kargil while Zanskar had been won by National Conference-backed Independent, Bakir Hussain Rizvi, who had later sided with the BJP.