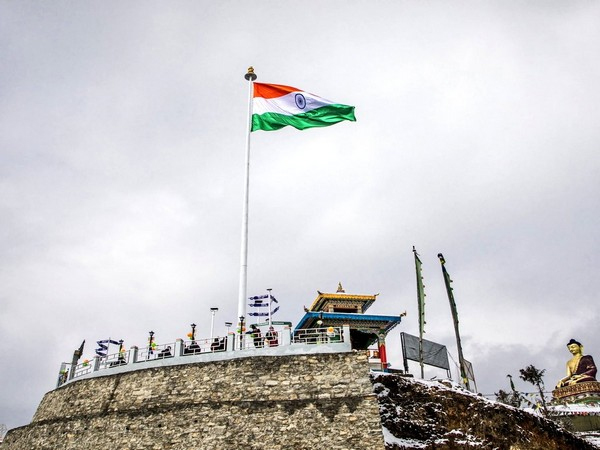 Tawang (Arunachal Pradesh), Feb 4: A 104 ft tall monumental national flag was hoisted by Arunachal Pradesh Chief Minister Pema Khandu on Thursday at an altitude of 10,000 feet at Ngangpa Natme (Buddha Park) at Tawang, a Buddhist pilgrim town bordering China.
It is the second-highest national flag in the country in terms of altitude, said the Chief Minister.
Sharing visuals of the monumental national flag, Union Law Minister Kiren Rijiju on Friday tweeted, “A 104 feet tall National Flag at the altitude of 10,000 feet in Tawang, Arunachal Pradesh” with a hashtag “Jai Hind.”
Meanwhile, the Chief Minister of the State said that the national flag has been dedicated to the people of Arunachal.
“Proud to dedicate to patriotic people of Arunachal a 104ft national flag, which was hoisted today at Ngangpa Natme (Buddha Park) in Tawang. At 10000 ft, this monumental national flag overlooking the Tawang city, is second highest in the country in terms of altitude,” Khandu tweeted on Thursday.
Taking to Twitter, he also shared some breathtaking photos of the viewpoint at Ngangpa Natme (Buddha Park) in Tawang. (AGENCIES)