BHADERWAH, Mar 13: A massive landslide buried around two dozen shops at Bathri market near Thathri-Gandoh road this morning.
However, there was no casualty or injury reported in the incident as the slide hit the commercial area in the wee hours.
The slide surged down on around 19 commercial structures comprising 25 shops at Bathri market near Tehsil Kahara on Thathri-Gandoh road, a police official said.

Click here to watch video
“Around 25 shops in 19 commercial structures got completely buried under the debris of massive landslide. Police team led by SDPO Gandoh Mohammad Nawaz Khanday along with locals started rescue operation and simultaneously district administration was informed about the incident with a request to immediately send the machines to remove the debris from the road”, police official said, adding that was no report of any casualty or injury.
However, cognizance has been taken by the Gandoh Police in the incident.
Meanwhile, locals of the area held protest against district administration and demanded compensation.
Later, SDM Thathri Mohammad Anwar Banday reached the spot and assured the protesters of providing adequate compensation to the landslide affected people.
On the assurance, the protestors dispersed. 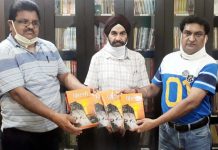