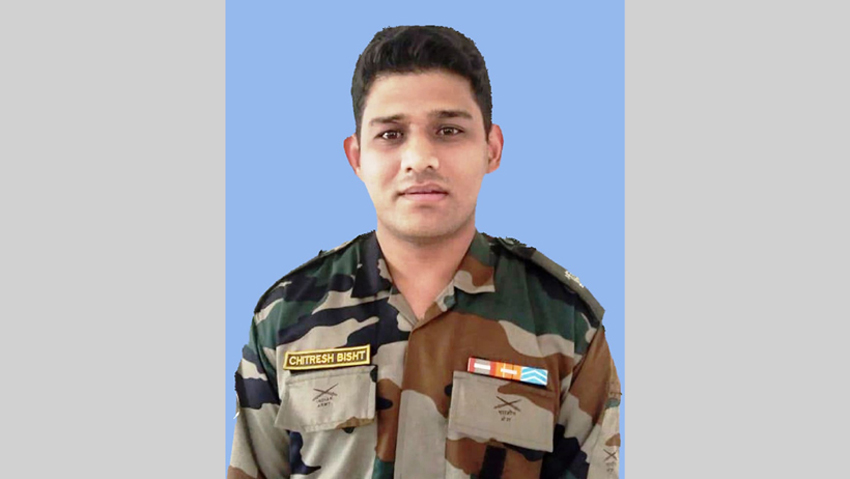 Excelsior Correspondent
JAMMU, Feb 16: An Army Major was martyred while defusing mine in Jan-ghar area of Nowshera sector in Rajouri district today.
The ma-rtyr has been identified as Major Chitresh Singh Bisht, who was scheduled to get married with Ankita on March 7 next month. Thirty-one year old Major hailed from Dehradun, Uttarakhand and is survived by his parents.
Official sources said Army detected mines planted close to the Line of Control (LoC) in Janghar area of Nowshera sector in Rajouri district at 3 pm today.
Major Bisht was leading the Bomb Disposal Squad to defuse the mines. He had defused one of the mines successfully.
However, while neutralizing another mine, the device got activated in which the Major suffered grievous injuries and attained martyrdom.
“Major Bisht was a brave and sincere soldier. The nation will always remain indebted to him for supreme sacrifice and devotion to duty,” a Defence spokesman said.
Northern Army Command chief Lt Gen Ranbir Singh and all ranks of the Army have saluted supreme sacrifice of Major Chitresh Singh Bisht and offered deepest condolences to the family of the martyr.
There was no immediate comment from the Army as to whether the mines had been planted by Pakistani army or the militants.