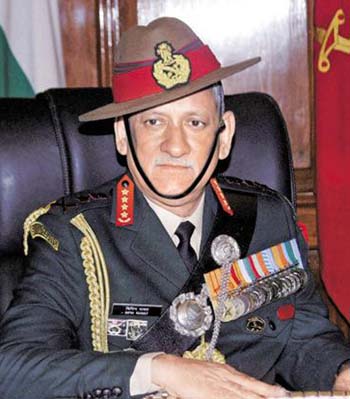 SRINAGAR: Army chief General Bipin Rawat reviewed the security situation along the Line of Control (LoC) and in the hinterland in Kashmir during his day-long visit to the valley today.

The Army chief visited Kashmir Valley to review the prevailing security situation along the Line of Control and also in the hinterland, a Srinagar-based defence spokesman said.

He said, accompanied by Northern Army Commander Lt Gen Ranbir Singh and Chinar Corps Commander Lt Gen A K Bhatt, the Army chief visited forward posts along the LoC in the frontier districts of Kupwara and Baramulla where he was briefed on all aspects of operational and logistical preparedness. (AGENCIES)