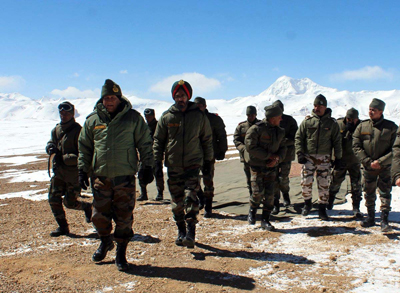 Excelsior Correspondent
JAMMU, Mar 30: Army chief Gen Bipin Rawat today held high level review of situation along Line of Actual Control (LAC) with China in Eastern Ladakh during his day long visit to Leh district of Ladakh region. Top Army Commanders gave extensive briefing to the Chief of Army Staff (COAS) on the situation and “operational preparedness” of the troops.
This was the Army chief’s second visit to Jammu and Kashmir during past five days. On March 26, he had visited Nagrota, the headquarters of 16 Corps to address biennial conference of Rashtriya Rifles and had lauded anti-militancy operations undertaken by the Army.
Gen Rawat arrived at Leh this morning from New Delhi and visited forward posts of the troops along LAC with China in Eastern Ladakh for on spot assessment of the situation and requirements of the troops. He interacted with the troops serving in sub-zero temperatures in the area.
“The Chief of Army Staff was briefed on the operational preparedness in Eastern Ladakh sector. He appreciated the efforts of troops deployed in harsh weather conditions,” sources said.
They said Gen Rawat’s visit has boosted the morale of soldiers deployed in difficult locations in Ladakh in extreme hostile weather conditions and rugged terrain with lack of adequate infrastructure like road connectivity etc.
Though there have been no major face-offs between Sino-Indian troops in Eastern Ladakh sector for the past quite some time now, the Indian troops always remained on high alert to guard against any kind of incursions by the People’s Liberation Army (PLA).
However, despite peaceful situation, Indian Army has been taking no chances along LAC with China in all five States, where India shares boundary with the neighbouring country especially after Dokalam incident where the troops of two countries remained in an eyeball-to-eyeball situation for nearly two months before both sides retreating.
India shares LAC with China in Jammu and Kashmir, Himachal Pradesh, Uttarakhand, Sikkim and Arunachal Pradesh. Indian troops all along the LAC with China have been maintaining high degree of alert and keeping strict vigil on the situation though there has been no major standoff anywhere after Dokalam.
Early this month, the Centre had approved Rs 3482.52 crore for completion of several strategic projects along Sino-Indian border, majority of which were pending for last 13 years, and set 2020 as deadline for their completion with more funds, if required, will be no bar.
Number of the strategic projects, approved by the Central Government, falls in Ladakh region of Jammu and Kashmir, where the LAC with China falls in rugged mountains with no road link to majority of posts manned by Army and Indo-Tibetan Border Police (ITBP) due to lack of interest on this front by the previous Governments.
While approving Rs 3482.52 crore for 73 strategic projects, the Centre Government has set the deadline of 2020 for their completion. They said majority of these projects were likely to be executed by the Border Roads Organization (BRO), Central Public Works Department (CPWD) and National Projects Construction Corporation (NPCC).
The projects, approved by the Government of India, included roads connecting Indian side of LAC with towns and cities to help troops reach right up to their posts on the vehicles instead of trekking rugged mountains for several kilometers, which is the case at present in some of the areas.
“A large number of these road projects fall in Ladakh region,” sources pointed out and said the projects would cover all five States including Jammu and Kashmir, Himachal Pradesh, Uttarakhand, Sikkim and Arunachal Pradesh, which share 4000 kilometers LAC with China.
All these projects were initially conceived in 2005 during the tenure of UPA-I headed by Dr Manmohan Singh. The then Government had set deadline of 2012 for completion of all these projects. However, in the absence of funding, no headway was made in completion of the projects.
Sources said out of the 73 roads of strategic importance, 27 roads involving 804.32 km are being constructed by Ministry of Home Affairs in Jammu and Kashmir, Himachal Pradesh, Uttarakhand, Sikkim and Arunachal Pradesh at an estimated cost of Rs 1,937 crore.