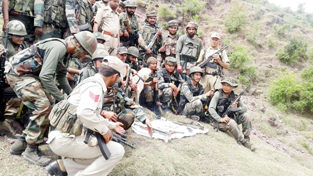 Excelsior Correspondent
JAMMU, Apr 8: Army and police today busted a terrorist hideout in Rajouri district and recovered two AK assault rifles along with some ammunition.
The hideout was unearthed during an ongoing search operation in some villages including Gadyog in Budhal area, Senior Superintendent of Police (Rajouri), Yougal Manhas, said.
Besides the two AK rifles, two magazines and 60 rounds of ammunition were also recovered from the hideout which was believed to be set up by terrorists when they were active in the area over a decade back, he said.
Manhas said no one was arrested in connection with the recovery during the operation which was still continuing.