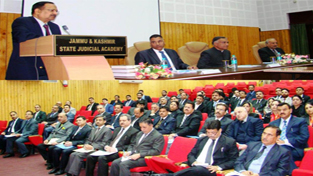 Excelsior Correspondent
SRINAGAR, Apr 8: Acting Chief Justice of J&K High Court Justice Ramalingam Sudhakar today laid stress on implementation of J&K Victim Compensation Scheme in letter and spirit.
In his inaugural address at one day Special Training Programme on “Sentencing and Victims Compensation Scheme, Rights of Victim and Accused Relating to Sentencing and Choosing Appropriate Sentence” organized by State Judicial Academy for Judicial Officers of Srinagar, Anantnag, Baramulla, Budgam, Pulwama, Kulgam, Shopian, Bandipora, Ganderbal and Kupwara districts, Justice Sudhakar  said, “the judgement of the Trial Judge is respected by the highest courts if the same is in accordance with well established principles of law and well reasoned”, adding “the Judge shall not lose sight of the victim and ensure that compensation is paid to the victim of crime”.
“The J&K Victim Compen-sation Scheme, 2013 is required to be implemented in letter and spirit. The law confers a solemn duty on the court to apply its mind to the question of compensation in every criminal case”, he further said, adding “the power of Judge is the knowledge of law and at the time of delivering judgement, Judge has to give heart and soul to the judgement as judgement should be supported by cogent reasons so as to do complete justice between the parties”.
He emphasized upon the Judges to read books of great authors, Judges and Jurists to improve their vision and horizon of knowledge as the society expects the Judge to be the embodiment of knowledge and excellence.
Resource Persons Justice Muzaffar Hussain Attar, Justice (retd) Hasnain Masoodi, and Abdul Rashid Malik, Director Judicial Academy deliberated upon the concept, sentencing in murder trials, sentencing in trial of offences against women, children, rights of accused relating to sentencing and the salient features of J&K Victim Compensation Scheme, 2013.
The proceedings were conducted by Abdul Rashid Malik, Director Judicial Academy, who said, “sentencing is a facet of social justice and the Judge has to take into consideration the plight of the victim as well as the cry of society for justice”.
“A Judge, while administering justice, should not be influenced by the tides and currents of the human emotions as the personal philosophy or any other bias of Judge has no role to play in his judgements”, he further said.