Excelsior Correspondent
JAMMU, Sept 21: The members of Apni Party Trade Union today staged a protest demonstration here to oppose opening of Reliance Stores in Jammu and Kashmir.
Extending their support to the Chamber of Commerce and Industries call for Jammu bandh on September 22, 2021, Apni Party Trade Union leaders and members gathered at Gole Market under the leadership of their president, Ajaz Kazmi. The protest was also joined by Chemist Association, President, Prem Sharma.
They held a demonstration against the opening of Reliance stores while extending support to the Bandh call.
Speaking on the occasion, Ajaz Kazmi said that they are with the traders and their demand. “After August 5, 2021, the traders of Jammu suffered and COVID-19 situation also destroyed their hopes of revival of their business,” he added.
Click here to watch video
He said that the opening of Reliance stores will affect all types of wholesalers and retailers and therefore, it would have adverse impact on the existing business establishments.
“The Government should have given them financial support for the revival of their business and its revival but the opening of Reliance stores will further add to their suffering,” he said.
Provincial president, Apni Party Trade Union, Raj Kumar Sharma said that the hotel industry has already been facing a financial crunch.
“We will not leave the traders, hoteliers, and others unrepresented. We will fight for their cause until their demands are accepted,” he added.
District President, Jammu Urban, Apni Party Trade Union, Anirudh Vasist, Provincial Secretary, Mohammed Ashraf, Ex-MLA Faqir Nath, General Secretary, Sardeesh Raina, SC State Coordinator, Bodh Raj Bhagat, OBC State Coordinator, Provincial Secretary, Dr Rohit Gupta, Madan Lal Chalotra, District President, Udhampur, Hans Raj Dogra, Provincial Coordinator, Youth, Jammu and many others were present during the protest.

BMS holds protest against killing of labourers by terrorists

Situation  in Kashmir will impact business in J&K: CCI 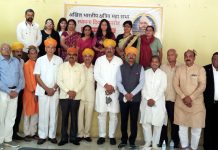 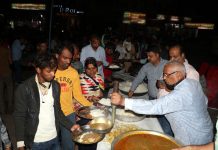