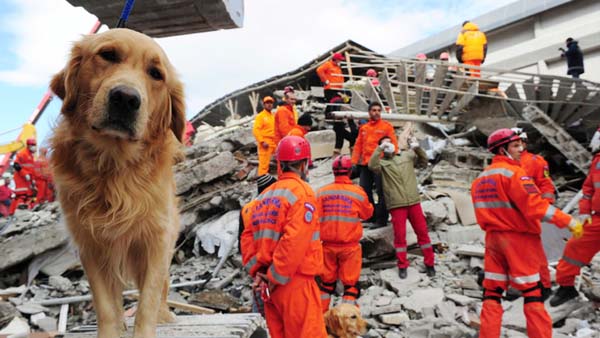 Dr Monica Narang
“Animals have the ability to detect sounds and vibrations at low frequencies that human being can not detect , allowing them to sense impending earthquakes. If human beings are able to interpret the signals given by animals before any disaster , then safety measures can be taken on time and many lives as well as property can be saved. Despite decades of research , scientists do not know how to predict earthquakes and tsunamis, but animals can do better. From many natural disasters ,many stories emerge of predictive pets who have known beforehand and alerted humans of impending disaster. Many animals show signs of restlessness before a natural disaster such as tsunami, hurricane, volcanic eruption or earthquake. There are numerous anecdotes about how dogs often start behaving abnormally right before an earthquake, how elephants seem to lose their mind before a landslide, or how sharks movement patterns change before a hurricane or a cyclone .
Animals have a special kind of power which is called sixth sense .Even from old mythodogy, it is believed that they possess an advanced perceptive sense that helps them to survive in the jungles. It is well documented how migratory species also make use of electromagnetic fields to navigate. Some pets have the uncanny ability to predict future catastrophes. This ability has stumped humans for generations.
Researchers have discovered that ants know when an earthquake is about to strike . Animals are incredible , they use their senses to determine if there is any danger around them . They see, smell and listen for anything unusual .It has always been understood that animals can sense a natural disaster and leave the area before it happens. It has been observed that dogs behave abnormally just a few minutes before an earthquake begins to shake the whole world. In one such case , just before people started feeling the first shocks of the earthquake in Gujarat (India) in 2001 , dogs in the street began barking wildly at nothing and running haphazardly as well as showing other signs of unexplained behaviors.
It is scientifically true that animals have senses more developed than human beings which includes not only hearing, but other senses such as sensing changes in atmospheric pressure.
Some of the animals who predict natural disaster like cats, many people have observed that their cats and dogs behave strangely before the ground shakes during earthquakes. They also bark and show signs of restlessness . The survey found that six or more days before the devastating earthquake, some cats engaged in unusual behavior and became more stressed. The cats may sense quakes ahead of time because they have a wider range of hearing than humans . Bees stop flying around and go to hive. Even snakes can sense earthquakes from 120 km away. Scientists are developing ways to predict earthquakes by observing erratic behavior in snakes. Environmentalists and scientists have made surveys concerning warning signs of animals before natural disasters. They found out different reactions of various animals for natural disasters like the infrasonic vibrations emitted by natural disasters are extremely low pitched vibrations and animals like cows, horses and elephants can hear low levels and interpret vibrations as signs of danger and run for safety.
Another finding is Biometric (air) and hydrostatic (water) pressure changes are more noticeable to animals than to most humans. When hydrostatic pressure drops, such as it does before a hurricane or other storms, sharks move in deeper waters for safety.
Observing these indications which should not be ignored and we can take advantage of the warning signs exhibited by these four legged saviors and winged weather forecasters , if humans understand these beforehand signals of natural disasters and prepare faster for survival, many lives can be saved.
(The author is Assistant Prof. The Law School, University of Jammu.)