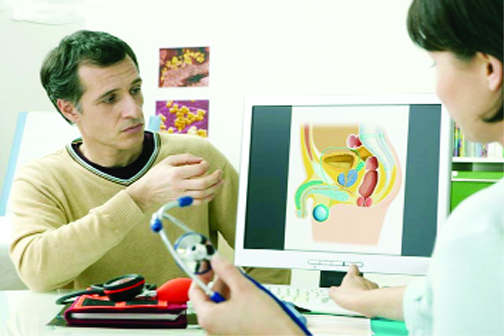 Dr Raja Langer
Even today, sexual medicine is perhaps most poorly understood and mismanaged of all medical    disorders .Ignorance , myths , superstition , guilt , stigmas , fears , embarrassment and taboos attached to anything sexual are responsible for mismanagement of this problem. Our society has always been patriarchal. A man’s ego often does not permit him to admit that there is something wrong with his manhood. The males inflicted with genital problems still do not know whom to consult. Quacks have been treating these problems frequently & unsuccessfully. Andrology is the branch of medicine that deals exclusively with the disorder of male reproductive function. Andrology is to the male, what gynecology is to the female.
The author in andrology clinics (in parts) shall take up common andrological issues.
1) Erectile dysfunction (impotence)
2) Ejaculatory disturbances (premature ejaculation)
3) Male infertility (Childlessness)
ERECTILE DYSFUNCTION (IMPOTENCE)
(What every adult should know)
PART-1(CAUSES)
Impotence by itself is not a disease but secondary to conditions brought up by other primary causes. The prevalence rates of complete ED is about 15% and moderate ED 30 % between ages of 40-70 yrs
CLASSIFICATION
1) Organic (Physical)   2) Psychogenic   3) Mixed   4) Unknown.
A) Organic (Physical)
1)     Diabetes mellitus        33%
2)     Diseases of blood vessels        20%
3)    Nervous system        18%
4)    Endocrine problems        6%
5)    Drugs        8%
6)    Substance abuse        7%

1) Diabetes is the leading cause of impotence now a days. The disease damages large and small blood vessels & peripheral nerves. About 50% of diabetic males are impotent by the age of 50. In 12% of diabetic men deterioration of sexual function can be the first symptom of diabetes. Activity of nitric oxide which is the main neuro transmitter causing penile erections is reduced at cellular level.
2) Diseases of blood vessels:  Atherosclerosis or hardening of the arteries causes reduced flexibility of the tissues & decreases the internal diameter of the vessels. As vessels causing obstruction in the heart, produces heart attack, obstruction in brain produces stroke, in the same way obstruction in the penis produces impotence. Common causes of the disease of the arteries include hypertension, cigarette smoking, diabetes, deranged lipid profile (cholesterol). Men who ride bicycle more than 3 hours a week have increased risk of developing impotence since bicycle seat temporarily occludes penile vessels. Venous dysfunction from old age, diabetes, trauma and peyronie’s disease are proposed to be the common causes of venous impotence. Veins from the penis leak blood and prevent development of rigid erections. Some may have venogenic impotence by birth.
3) Neurogenic: Spinal cord injuries, radical pelvic surgeries, operations of rectum, spine, urethra, bladder, diseases of brain, spinal cord such as parkinson’s, stroke, encephalitis, epilepsy, tumors, dementia, Alzheimer’s disease, multiple sclerosis and diabetes are the major causes.
4) Endocrine problems: Androgen deficiency is seen in 2 -33% men with impotence. Testosterone or the Male hormone produced by the testis encourages male secondary sexual characters, enhances sexual interest, increases libido and sexual interest. Patients with low testosterone levels have increased impotence issues. High Prolactin levels causes loss of libido, increases size of male breast, infertility and especially impotence. Hyperthyroid & hypothyroid states are associated with impotence and causes increase in female hormone ie estrogen.
5) Drugs: About 250 prescribed are incriminated to cause impotence. Blood pressure lowering drugs like beta blockers (propanolol,atenolol), Diuretics like thiazides, Ace inhibitors like captopril, Alpha blockers like doxazocin, Psychiatric medicine like haloperidol, flupenthixol, Tricyclic anti depressants  like amytrypiline, chlorpromazine, diazepam, doxepin, fluoxeitene , imipramine, lorazepam ,phenytoin etc, Antihistaminics like ranitidine, cimetidine etc, Parkinson’s drugs like levadopa, chemotherapeutic drugs like antiandrogens flutamide, bicalutamide, ketoconazole, LHRH agonists for prostate cancer treatment, Lipid lowering drugs and of course tobacco consumption and alcohol are notorious to cause impotence.
B) Psychogenic- when there is no organic factor and problem really lies in mind; it is labeled as psychogenic impotence. It can be partner related where there is lack of arousability in specific relationships, owing to partner conflicts. It can be performance related and can be associated with sexual dysfunction such as rapid ejaculation or fear of failure.
It can be associated with negative mood states such as depression or major life stress such as death of the partner, loss of job. Relationship problems, pregnancy fears, negative sexual experiences, anxiety, partner anger, negative thinking, negative past sexual relationships, negative interpersonal relations, fragile self esteem, inadequate sexual techniques, poor communication, fantasies, no physical attraction, intimacy issues etc
The author shall discuss method of diagnosis and management of erectile dysfunction in the subsequent editions.
The author is Consultant Urologist & Andrologist in the city.
For queries & feed backs mail to drlangerraja@yahoo.co.in