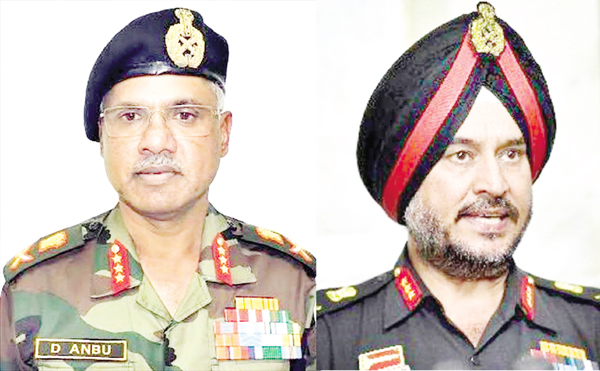 JAMMU, May 24:  In a major shakeup in top echelons of the Army, the Ministry of Defence (MoD) headed by Nirmala Sitharaman and Army Headquarters have cleared the appointment of General Officer Commanding (GOC)-in-Chief, Northern Command Lt Gen Devraj Anbu on the prestigious post of new vice chief of the Army.
Lt Gen Ranbir Singh, Deputy Chief of Army Staff (Information Systems and Training), at Army Headquarters, who was Director General of Military Operations (DGMO) during September 2016 surgical strikes by India inside Pakistan occupied Kashmir (PoK) is likely to succeed Lt Gen Devraj Anbu as new Northern Army Commander.
Sources told the Excelsior that Lt Gen Devraj Anbu will replace Lt Gen Sarath Chand as new vice chief of the Army. Sarath Chand will demit office on May 31 on reaching superannuation and Lt Gen Devraj Anbu could take charge of the new post on June 1. Lt Gen Sarath Chand had held various prestigious posts in his career.
“Though the name of Lt Gen Devraj Anbu for the post of Army vice chief was doing the rounds for past few days, a formal order was issued today by the Ministry of Defence. Normally, for such important posts, the successor is named well in advance before retirement of the incumbent.
Lt Gen Devraj Anbu accompanied Army chief Gen Bipin Rawat, who reached the Kashmir valley today on a two-day visit to review security situation in the wake of ceasefire announced by Union Home Minister Rajnath Singh for the holy month of Ramzan.
Sources said the Ministry of Defence and Army Headquarters were deliberating the name of Lt Gen Ranbir Singh as successor of Lt Gen Devraj Anbu. Lt Gen Ranbir Singh is presently posted as Deputy Chief of Army Staff (Information Systems and Trainings) and has served as the Director General of Military Operations (DGMO) when Indian Army had carried out surgical strikes at four places inside Pakistan occupied Kashmir (PoK) in September 2016, killing a number of militants and inflicting damage to their infrastructure.
Significantly, another Lt Gen AK Bhatt, who had succeeded Lt Gen Ranbir Singh as Director General of Military Operations, is already posted in Jammu and Kashmir as General Officer Commanding (GOC) of 15 Corps, headquartered at Badami Bagh Cantonment in Srinagar.
Lt Gen Devraj Anbu was commissioned in Sikh Light Infantry in 1980 and has commanded a Corps in the North East. He had taken over as the Northern Army Commander in December 2016.
He has vast experience and has served in all types of operational environments ranging including Siachen Glacier, counter-insurgency operations in Kashmir and Manipur and Operation Pawan in Sri Lanka. He has commanded a unit during Operation Parakaram; a Mountain brigade on the Line of Control; a Mountain Division in Sikkim; Indian Military Training Team in Bhutan and IV Corps (Tezpur). He has held staff appointments which include General Staff Operation at the Division level in North-East India; General Staff Operation at Corps Level in Kashmir and Military Observer with UN peacekeeping mission in Namibia (UNTAG).
Lt Gen Ranbir Singh was commissioned into 9 Dogra Regiment on 13 December 1980. He has held various important Command, Staff and Instructor appointments during his career.
He is considered to be an expert at counter insurgency operations, operational art and information operations. He has commanded the 181 Mountain Brigade and 33 Armoured division. He has held various staff appointments including that of Director General of Military Operations (DGMO). He has also served in UN Peacekeeping Missions to Angola and Rawanda.
Sources said the post of Deputy Chief of Army Staff (Information Systems and Trainings) will fall vacant with the posting of Lt Gen Ranbir Singh as the Northern Army Commander, which will be filled up by another senior Army officer in the rank of Lieutenant General.