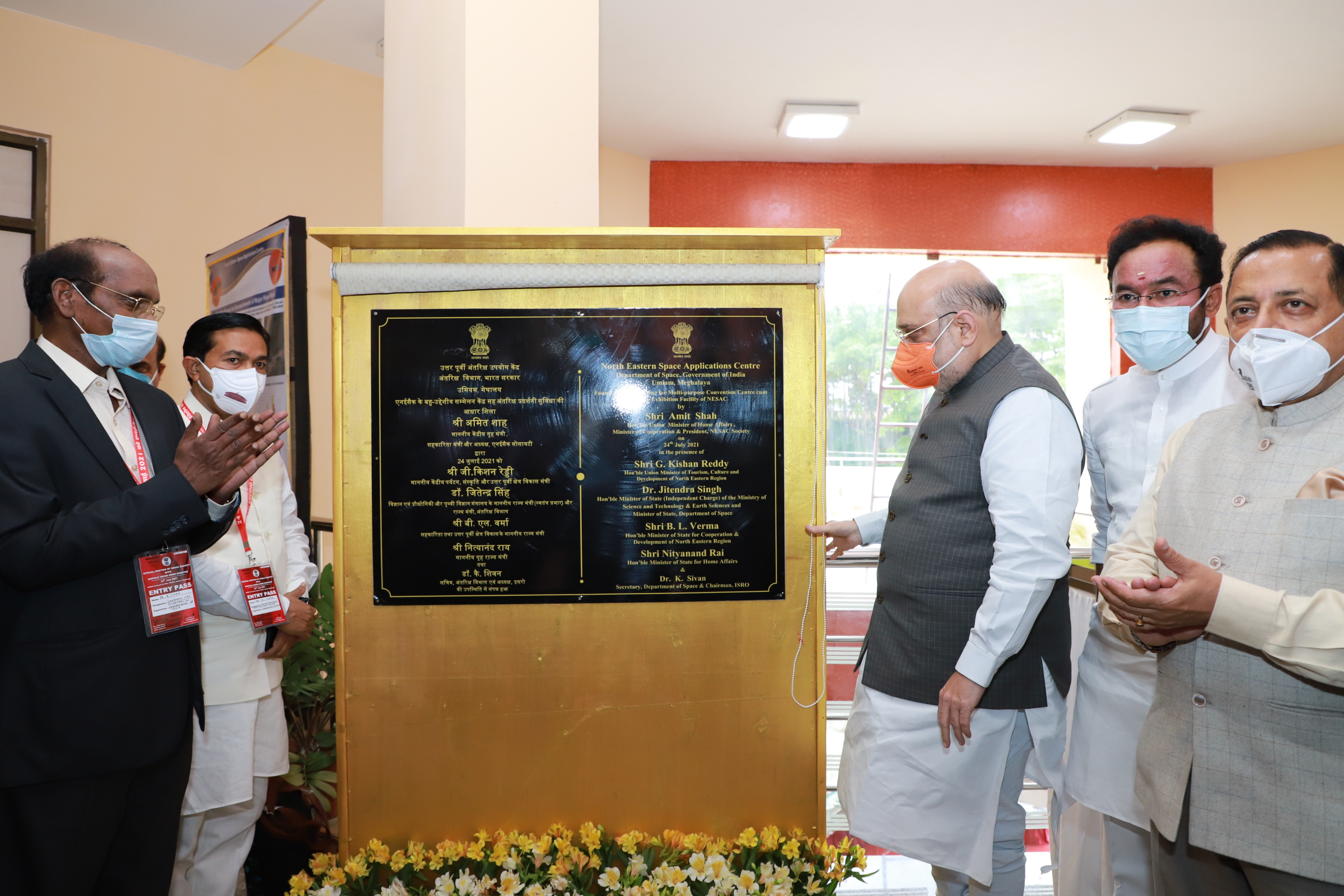 SHILLONG: Home Minister Amit Shah today laid the foundation stone of the new Convention Centre Facility at the Space Centre, NESAC (North East Space Application Centre) Shillong, Meghalaya.
Shah also chaired the meeting of the NESAC society to review the important projects in the North-Eastern Region. Union Minister of Culture, Tourism and Development of North-Eastern Region (DoNER) Union Ministers Dr Jitendra Singh and G.Kishan Reddy as well all the Chief Ministers and Chief Secretaries of the eight North Eastern States attended the meeting.
Home Minister said, ever since Narendra Modi took over as Prime Minister, India’s Space Technology is being applied in diverse fields and sectors to bring about all round development and to bring “ease of living” for common man. He said, Space Technology must be used widely in areas like flood and disaster management, border management issues, mapping of forest gap areas, expansion of land area for horticulture development, identification and rejuvenation of wetlands and diversion of floodwater, assessment of Bamboo resources for livelihood needs among others.
In his address Dr Jitendra Singh described it as a historic day because for the first time in the history of independent India, any Union Home Minister had visited the NESAC Centre at Shillong and Amit Shah had made a history by becoming the first-ever Home Minister to do so. Shah also was the first Home Minister to chair a review meeting of important projects of North Eastern States in the NESAC Space Centre premises, he said.
The Minister asked the individual State Governments of Northeast to send their specific proposals for execution by ISRO, and also to send officials for training in Space Technology Applications
Dr Jitendra Singh informed that ISRO is already monitoring and Geo-tagging 67 projects at 221 sites in all the 8 States funded by MDoNER/NEC. He said, this is first of its kind in the whole country, where there is an institutionalised involvement of ISRO in mapping and sharing of data for developmental projects and can become a model for other States too.
The North Eastern Space Applications Centre (NESAC) is an autonomous organisation under Department of Space at Shillong and provides dedicated service to the North Eastern Region (NER) of India comprising of eight states viz. Arunachal Pradesh, Assam, Manipur, Meghalaya, Mizoram, Nagaland, Sikkim, and Tripura.
The Centre was set up with a vision to play the catalytic role in holistic development of North Eastern Region of India by providing Space Science and Technology support on natural resource management, infrastructure planning, healthcare, education, emergency communication, disaster management support, and space and atmospheric science research.
Earlier, the Home Minister was welcomed by Dr Jitendra Singh and Chief Minister of Meghalaya Conrad Sangma and other dignitaries on his arrival at Shillong.