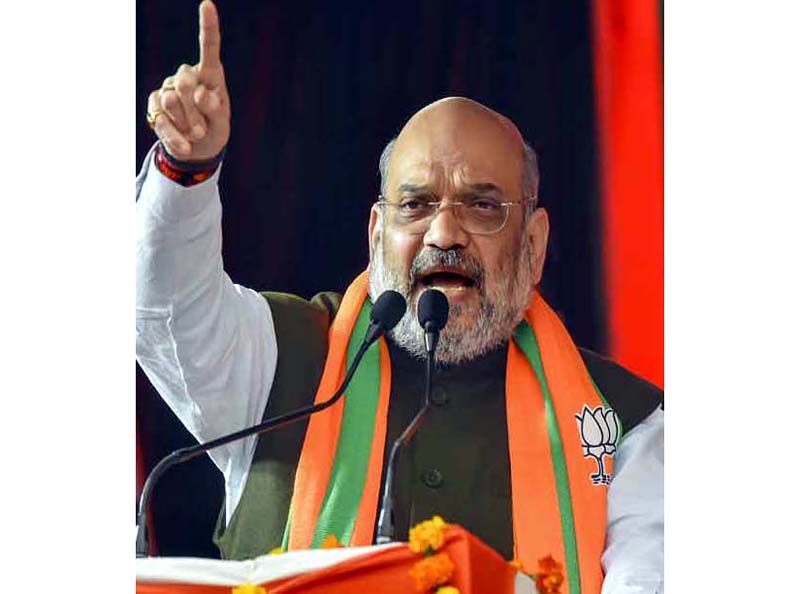 NEW DELHI, Jan 27:
Stepping up attack on Chief Minister Arvind Kejriwal, Union Home Minister Amit Shah on Monday dared the AAP chief to visit the anti-CAA protest site at Shaheen Bagh so that the people of Delhi can decide whom to vote for in the assembly election.
Addressing a rally in Rithala in northwest Delhi, Shah said Kejriwal and Congress leader Rahul Gandhi were against the construction of Ram temple, the scrapping of provisions of Article 370 and not bothered about the country’s image and soldiers.
The opposition fears that they will upset their vote bank, he said and asked, “Are you their vote bank? Where is their vote bank?” To this, the crowd replied, “Shaheen Bagh”.
The BJP leader claimed the Delhi Police has booked Sharjeel Imam, a JNU student, on the charge of sedition for his comment of “trying to cut chicken’s neck” and breaking the North East from the rest of the country.
“I want to ask Kejriwal whether he is in favour of apprehending Sharjeel Imam or not? Whether you are with the people of Shaheen Bagh or not, please tell the people of Delhi,” Shah said. Imam was one of the initial organisers of the Shaheen Bagh protest.
Hitting back at the BJP, Kejriwal alleged that the saffron party does not want to open the Shaheen Bagh stretch of the Kalindi Kunj road as it is doing “dirty politics” over it.
He said law and order in the national capital lies entirely with the Centre and “if they are saying that they need permission from me, I am giving them permission, open the road in one hour”.
“I can give it to you in writing, the BJP does not want to open the route in Shaheen Bagh. The Shaheen Bagh route will remain closed till February 8 (election day) and it will open February 9,” Kejriwal told reporters.
Calling Kejriwal a member of the ‘tukde tukde’ gang, a term used by the BJP to attack groups it accuses of working to promote violent leftists and separatism, Shah sought to return fire and said the protesters of Shaheen Bagh will not listen to his party.
“They will not listen to us. You people (AAP leaders) say that you are with Shaheen Bagh, if you have the guts then go and sit with them and let Delhi decide,” Shah said.
At another election rally in Janakpuri, Shah accused Gandhi and Kejriwal of doing politics of “vote bank” on national issues and “supporting” the protest at Shaheen Bagh while instigating riots and vandalism.
“The Modi Government will not spare anti-national elements,” he warned.
Upon mentioning the recent Supreme Court judgment on Ayodhya, Shah was greeted with cheers and chants of ‘Jai Shri Ram’.
The Home Minister further said that this was the first Republic Day in Jammu and Kashmir after the abrogation of Article 370 and the tricolour was unfurled there with enthusiasm and without any bloodshed.
The former BJP president also attacked the Kejriwal government for not fulfilling promises like regularising temporary employees, providing free wifi, opening new schools and colleges, constructing roads and cleaning the Yamuna.
“Kejriwal government is in power since five years but till today there is no clean drinking water in the city. There are no good schools or hospitals as claimed by him. When I visited a Delhi government school, I saw that it was operating from a building that was illegally built and falls in the list of those that to be erased,” Shah said.
He claimed that Kejriwal came to power with the help of Anna Hazare’s anti-corruption movement but “completely changed” later on. “He had said that he would not take any government accommodation or vehicles and other facilities but after becoming chief minister he availed all these facilities,” Shah said. (PTI)