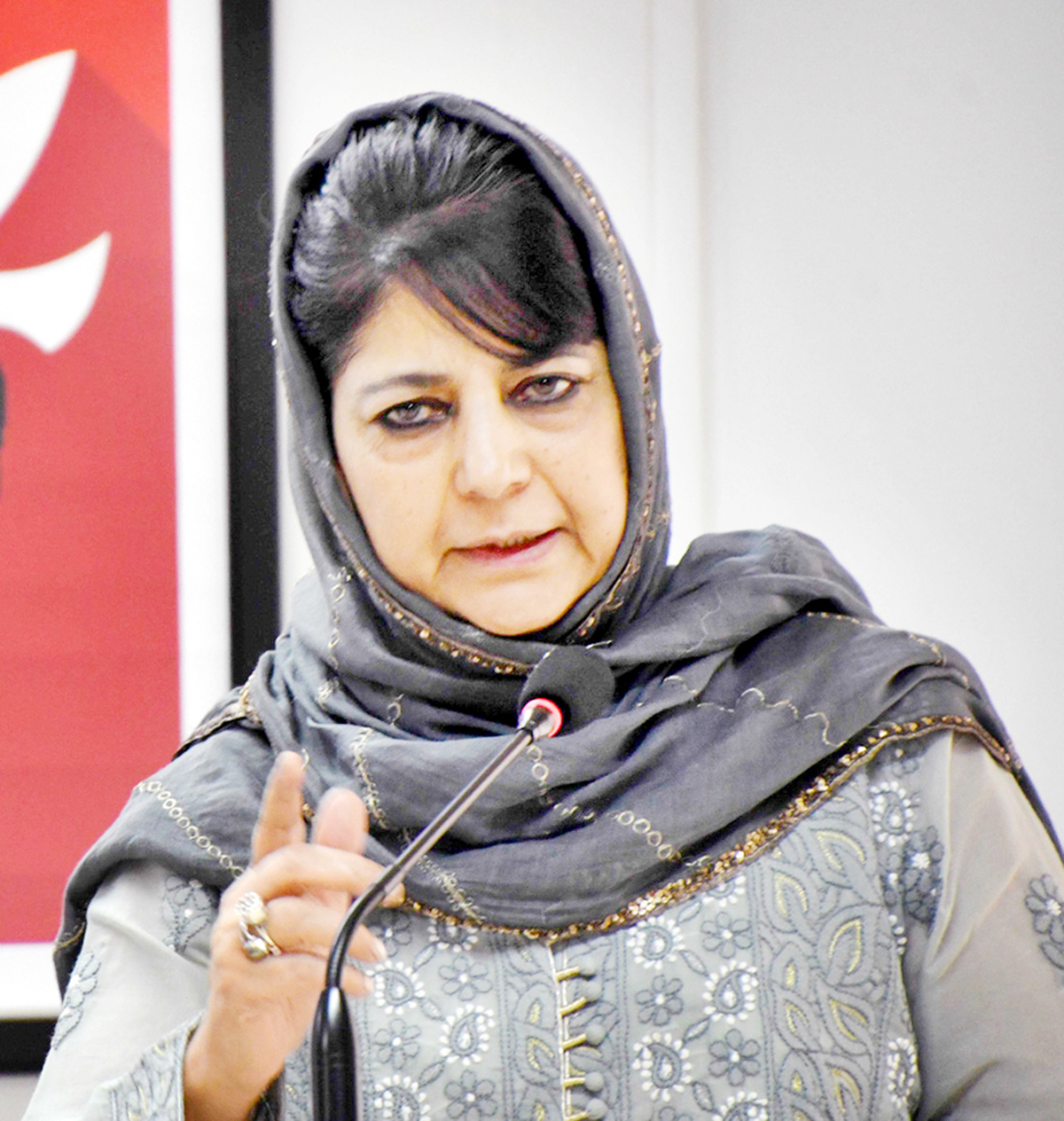 Excelsior Correspondent
MUMBAI, Dec 14: People’s Democratic Party (PDP) president and former Chief Minister Mehbooba Mufti today said the PDP had an alliance with the BJP knowing it will be ‘suicidal’ and damage them politically but the PDP went for it to bring Kashmiris out of the mess, they’re in.
“My father late Mufti Mohammad Sayeed, who became the Chief Minister of the State after PDP and BJP forged an alliance in March 2015, had a great vision. He wanted the political process started by (Atal Bihari) Vajpayee Ji to be taken forward by Prime Minister Narendra Modi. We thought though it will damage us politically, we will be able to take Kashmiris out of the mess they’re in. That was the real purpose. We staked everything but Modi dejected the Kashmiris,” Mehbooba said while addressing a function organized here by Observer Research Foundation (ORF) on the topic “Kashmir-The Way Forward’.
Mehbooba said a bullet for bullet approach adopted by the military forces has lead to further alienation among the Kashmiris.

“New Delhi will have to look beyond the proxy-war paradigm and attempt to understand the youth in Kashmir. There is total distrust and disconnect between people of Jammu and Kashmir and New Delhi. The people look inwards or outwards (outside the border) for support,” Mehbooba said, adding the trust deficit between Kashmir and New Delhi is the basic problem.
She recalled that when the PDP entered into a tie-up with the BJP to form Government in J&K, it was expected that Prime Minister Narendra Modi will reach out to the people of Kashmir and Pakistan to help ease tensions and normalize the situation as was done by Atal Behari Vajpayee.
“We knew it (alliance with the BJP) was suicidal for the party. Yet we put everything at stake. For a party which is seen as one that encourages talks with separatists, we thought Modi will rise to the occasion and since (former PM Atal Behari) Vajpayee did not have that kind of a mandate, we thought Modi will reach out to Pakistan, to the people of J&K and start where Vajpayee had left,” she said.
“When Vajpayee was the Prime Minister and Mufti Saheb was the Chief Minister of J&K, the message which went out was both the Centre and the State Governments were on the same page and the 2002-2005 period became the “golden period” in the history of Jammu and Kashmir,”, she said.
The PDP, she recalled, ensured a crowd of 30,000 when Modi was invited to the Kashmir valley but he did not rise to the occasion. “The workers and other people, who had come to the rally went dejected as he made no mention of reaching out to the Kashmiris as well as people of Jammu and Kashmir,” she asserted.
“Modi had the mandate which Vajpayee did not. While forging an alliance with the BJP, we had thought if he (Modi) could solve Kashmir’s woes, we did not mind if that meant an end of PDP. We took disillusionment (of people) on us for this purpose,” Mehbooba said.
Asked if she would be open to an alliance with the Congress and the National Conference, she said, “We had never thought we would ally with the BJP. Now, an alliance with the Congress and NC depends on the need of the hour.”
She said countries in the South Asian Association for Regional Cooperation (SAARC) are being held hostage to the dispute between India and Pakistan.
The countries in the regional grouping should come together and make Jammu and Kashmir a model of cooperation, the PDP chief said.
“SAARC countries are being held hostage due to the animosity between India and Pakistan. Why can’t all the SAARC countries come together and make Jammu and Kashmir a model for co-operation of SAARC countries,” Mehbooba said.
“Let’s have a SAARC office of all countries in Jammu and Kashmir. Let’s have Handicraft University of SAARC countries in Kashmir because there is no better place for handicraft than Kashmir,” she said.
The need today is to make borders irrelevant, she said.
Asserting that governance is possible if you have peace, the former Jammu and Kashmir Chief Minister said: “Kashmiris are the sufferers. Till when will our people keep witnessing this farce of people getting killed”?
However, she said: “We need to replace the idea of ‘Azad Kashmir’ with a better idea within the framework of the Indian Constitution. We cannot go back to 1947. We have to move forward”.
On a day the Supreme Court dismissed pleas challenging the Rafale deal, Mehbooba said the BJP should also wait for the Apex Court’s verdict on the Babri Masjid issue.
“Like the Rafale decision was welcomed, I hope they (the BJP) will wait for the decision (of Supreme Court) on Babri Masjid as well and won’t start pointing fingers at the SC. We have an institution which is highly respected,” Mehbooba said.
Praising Congress president Rahul Gandhi over his party’s success in the three States (of Rajasthan, Madhya Pradesh, Chhattisgarh), Mehbooba said, “He fought his first election in 1994. He has given a lot of time. He is now arriving”.
When asked if the People’s Democratic Party (PDP) will be a part of the grand alliance, the former Chief Minister of Jammu and Kashmir said although talks were taking place, her party was a “small player” to be considered.