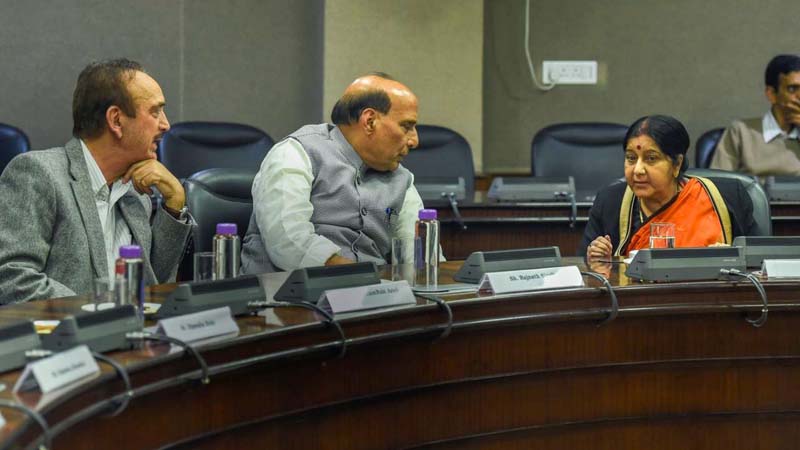 NEW DELHI, Feb 26:  Speaking with one voice, leaders of various political parties today congratulated the Indian Air Force for its “clean” pre-dawn operation against a terror camp in Pakistan and assured the Government of their support on any anti-terror action by it.
The leaders were speaking at an All-Party Meeting convened by the Government, where External Affairs Minister Sushma Swaraj briefed them about the operation that destroyed Jaish-e-Mohammed’s terror training camp in Balakot in Khyber Pakhtunkhwa province of Pakistan.
Swaraj later said she was happy that representatives of all parties lauded the Indian Air Force action and extended support to the Government by rising above politics.
“I am happy that all representatives of political parties in one voice first congratulated the Indian Air Force and also assured the Government of their complete support always on any action taken by us against terrorism and displayed unity by rising above politics without distinguishing between the ruling or the opposition sides,” the Minister said after the meeting.
Swaraj said she had convened the all-party meeting to brief the opposition parties where Home Minister Rajnath Singh, Finance Minister Arun Jaitley and Parliamentary Affairs Minister Vijay Goel were also present.
The Minister also told the leaders that she is in touch with the Foreign Ministers of various countries on the issue and she will be travelling to China soon where she will meet the Chinese and Russian Foreign Ministers and discuss the operation.
The Congress, which was represented at the meeting by Leader of Opposition in Rajya Sabha Ghulam Nabi Azad, said it will extend its support to the Government on any action it takes to eradicate terrorism from the country.
Azad said after the meeting that political parties lauded the IAF strikes to destroy terror camps in a “neat and clean” operation as there were no civilian casualties. He also said the leaders appreciated the efforts of the forces and they always have their support to end terrorism.
“We will support our security forces in their endeavour to finish terrorism coming into India from outside. The good thing was that it was a very clean operation which specifically targeted terrorists and terror camps and there were no civilian deaths,” he said.
CPI leader D Raja said that Swaraj told the leaders that it was a “non-military anti-terror operation”. He said that leaders congratulated the force and said that all should remain united on any anti-terror operation.
After Swaraj briefed them, the leaders sounded a word of caution to the Government to not lower the guard and watch out for Pakistan’s action.
“The Government should remain alert and watch out for what Pakistan is going to do,” Raja said.
Sources said the leaders of parties also said no jingoistic passions should be aroused after this operation.
They also called for Government action to “win back” the confidence of the people of Kashmir by engaging with them. They urged people to exercise restraint and said that there should be no attacks on Kashmiri students, a source said.
The meeting was also attended by CPI (M)’s Sitaram Yechury, TMC’s Derek O’Brien, Omar Abdullah of National Conference and Bhartruhari Mahtab from BJD, besides NCP’s Praful Patel and BSP’s Satish Mishra. BJP allies Naresh Gujral of Akali Dal and Ramdas Athawale of RPI-A also attended the meeting, among others. (PTI)