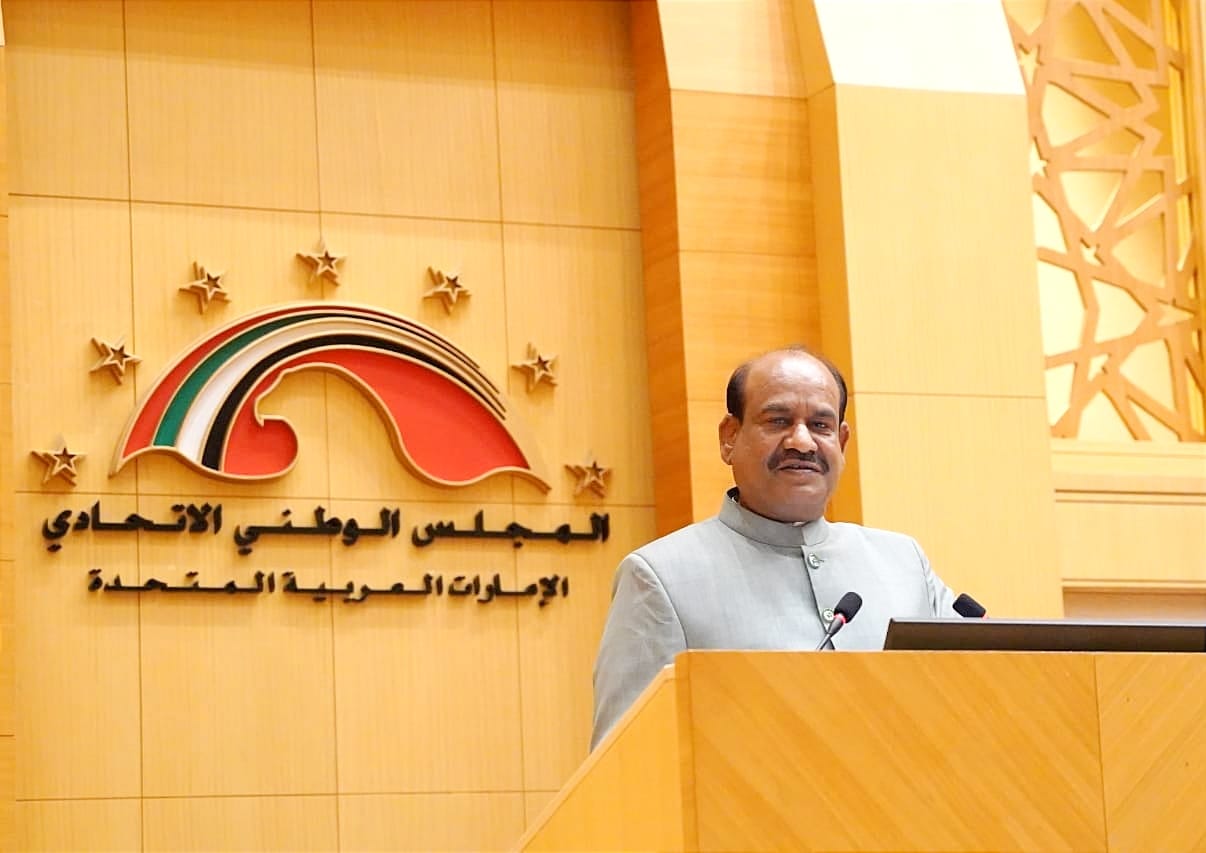 Abu Dhabi/New Delhi, Feb 22: To achieve global security, stability and sustainable development, it is imperative for all nations to unite in the fight against terrorism and extremism, said Lok Sabha Speaker Om Birla at the plenary session of Federal National Council (FNC) of the UAE on Tuesday.
Om Birla addressed members of the Federal National Council of the United Arab Emirates in the sixth plenary session of FNC in Abu Dhabi on Tuesday.
Speaking on the occasion, Birla said that India has always opposed terrorism in all its forms. The Lok Sabha Speaker stressed that for global security, stability and sustainable development, it is necessary that all the nations of the world come together to fight the challenges of terrorism and violent extremism. He condemned the recent terrorist attack in UAE.
Birla further added that the shared concern of India and UAE with regard to the increasing threats from religious extremism and terrorism to the safety of people is reshaping cooperation between the two countries in the current regional and global scenario.
Underlining that India and UAE have a long history of friendship and partnership, he said that the similarity of views between the two countries on bilateral and multilateral issues has deepened this relationship. Also, due to the regular visits of senior leaders and citizens to each other’s countries, the two countries have developed close cultural ties and people-to-people contacts.
Regrading the economic ties, Birla said that new efforts are being made at a rapid pace for the development of the economy in India and due to the efforts being made by the government, He said India is today the world’s leading investment destination and UAE companies can take advantage of the new opportunities arising in the fields of the digital economy, human resources and smart urbanization. He appealed to the investors in the UAE to invest in India, saying that India is ready to share its capabilities in the field of space and IT with the UAE and enhance mutual cooperation through this.
Referring to the visit of Prime Minister Narendra Modi to the UAE in 2015 and the visit of the Crown Prince of Abu Dhabi to India in 2016, Birla said that the Comprehensive Economic Partnership Agreement (CEPA) between the two countries has given a new dimension to bilateral relations and strengthened the base for future economic development. He suggested that both India and UAE should utilize the present opportunities and unite to further strengthen friendship and partnership so that people of both countries can get the maximum benefit from it.
The Lok Sabha Speaker welcomed UAE’s decision over the years to widen democracy and ensure women’s participation in parliament. He said that the Indian community living in the UAE, is the largest among the expatriate communities and they have played an important role in the economic development of the country. (AGENCIES)