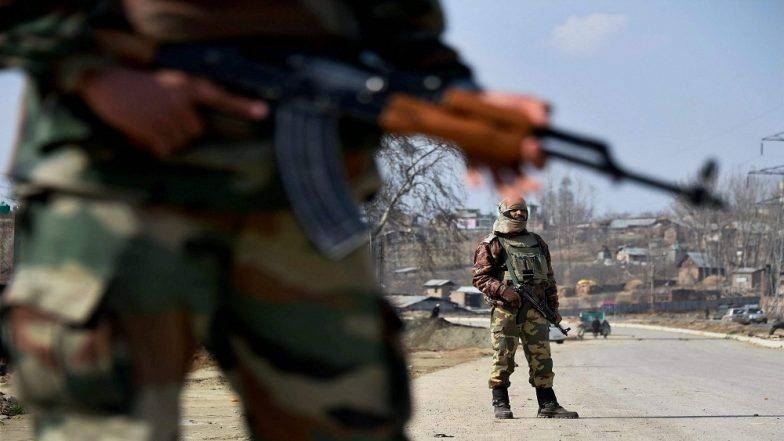 Fayaz Bukhari
Srinagar, Jan 12: Chief commander of Al-Badr Mujahideen was among two militants killed in a gun battle at Katpora area of Kulgam district in South Kashmir today.
Army’s 34 RR, Special Operations Group (SOG) of Jammu and Kashmir Police and Central Reserve Police Force (CRPF) cordoned off Katpora area of Yaripora this evening after specific inputs about presence of militants in the village.

Click here to watch video
The operation was launched following specific inputs about the presence of the group of militants led by Zeenat ul Islam Shah alias Dr Usman and including a Pakistani were hiding in the village.
As the security forces were conducting searches of the village, militants fired at them and tried to flee from the cordon but security forces fired back, leading to a gun battle.
A senior Army officer said that two militants were killed in the gun battle and Zeent-ul Islam Shah of Chilipora, Shopian was among them. The second militant has been identified as Shakeel Ahmad Dar alias Faisal of Chilipora, Shopian. Sources said that so far two bodies were recovered and security forces believed two more including a Pakistani were hiding in the village and their fate is not known.
Zeenat, 29, was earlier affiliated with Hizbul Mujahideen outfit and later he joined Al-Badr militant outfit. He was recruited in Hizbul Mujahideen in November 2015, and was considered an expert in Improvised Explosive Devices (IEDs).
Zeenat was first arrested in 2008, and was booked under the Public Safety Act (PSA) for being an Over Ground Worker of Al-Badr. He was also in touch with different outfits and was working as an Over Ground Worker for their members, arranging them food and supplies.
After his release in 2011, he initially worked with his father and got married before joining LeT. His father is an Imam in the local Masjid.
He was one of the main accused in the Shopian attack which took place on February 23, 2017 when militants ambushed Army patrol in Mulu Chitragam area of the district which left three soldiers dead.
Zeenat was among the three surviving most wanted militants in South Kashmir after Zakir Rashid Bhatt alias Zakir Musa and Reyaz Ahmad Naikoo alias Zubair.
The last year, when Al-Badr started gaining ground in Kashmir, Zeenat ul Islam left Hizbul Mujahideen and joined Al-Badr as the chief commander of the outfit, which is mainly operational in Shopian district of South Kashmir.
Following the gunfight, authorities snapped internet services in the Kulgam district and clashes broke out in the area as youth came out and pelted stones on the security forces who fired tear smoke to disperse them.
A police spokesman said that based on a credible input about the presence of militants in Kathpora area of Yaripora in district Kulgam, a cordon and search operation was launched today jointly by police and security forces in the area.
“As the searches were going on, the search party was fired upon by the terrorists. The fire was retaliated leading to a gunfight. In the ensuing encounter, two terrorists were killed and the bodies were recovered from the site of encounter. Their identities and affiliations are being ascertained. Pertinently no collateral damage took place during the encounter”, the spokesman said.
“Police has registered a case and initiated investigation in the matter. Incriminating materials including arms and ammunition were recovered from the site of encounter”, the spokesman said.