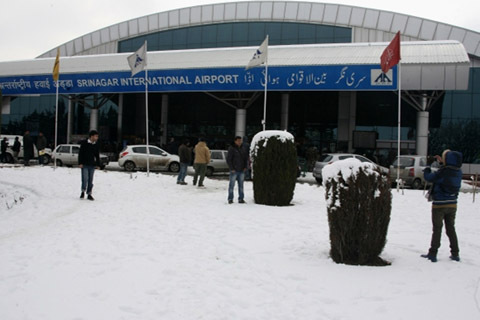 SRINAGAR: Air traffic remained suspended for the second successive day on Friday at Srinagar International Airport, where all flights were cancelled due to poor visibility.
There is no possibility of resuming the air traffic from the only airport in the valley following poor visibility and accumulation of snow on the runway, an official said.
He said no flight could be operated from the airport since early Thursday morning due to poor visibility and heavy snowfall. “Operation is underway to clear snow from the runway,” he added.
The official said that the air traffic can be resumed only after the improvement in the weather condition. “Till the time visibility improves, flight can’t be operated from the airport,” he said, adding considering the forecast it is highly unlikely that the air traffic will resume on Friday.
Meanwhile, hundreds of passengers could be seen waiting at the airport since early morning, hoping that the flight service will resume from the airport. “I had an early morning flight to Delhi so I reached the airport at around 0800 hrs. But to my disappointment, I was informed that the flights have been suspended. After waiting for over four hours, I was told that the flight has been cancelled,” a passenger, Rameez Ahmad, said. (agencies)