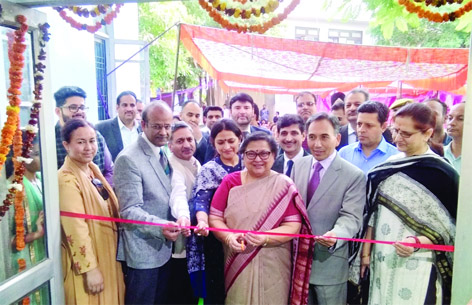 M K Sharma
Aging is an inevitable process which has been experienced and perceived by mankind from multifarious perspectives – socially, psychologically, physically, philosophically and so on. Though the Upanishads tell us that the core of human self is not the body, or the mind but the atman or ” Self”, the all-pervasive fear amongst human beings for aging hint towards the lost glory of our socio-cultural ethos where elders were elevated to the level of divine. Ostensibly, the social, physical and psychological perspectives on aging have been undergoing substantial transformations over the decades when aging with wisdom has moved on to aging with dignity. The reason for this paradigm shift lies in India’s success rate in increasing life expectancy, thereby, increasing the number of elderly citizens in the country. The share of old persons (age 60 years & above) in the total population is set to rise from 6.9% in 2001 to 12. 4% in 2026.
A quick glance at the societal evolution is imperative here as it reflects the changing dynamics of family structure gradually relegating the very existence of older people to the margins. In the ancient times, the position of older people in the family structure was supreme since children treated them with unconditional respect and care. Likewise grandparents played a significant role in passing on their pearls of wisdom to the next generation. Nevertheless, with the emergence of the nuclear family system the sentiments of children towards their parents have also been diluting due to umpteen reasons – be it self-centered approach, unjustifiable ambitions or others. The growing apathy amongst youngsters towards their parents is one of fastest emerging trends in Indian society which is a matter of serious concern. Due to sheer neglect of older people at the familial level, the responsibility to maintain the parents has gradually shifted from children to government. Undoubtedly, different legislations, welfare schemes and policies to look after the welfare of old people have been implemented by the government, there existed a gap in terms of an effective legislation as there was no special legislation exclusively for senior citizens till 2007 in the erstwhile state of Jammu and Kashmir
In 2007, the Parliament enacted a legislation called Maintenance and Welfare of Parents & Senior Citizens Act 2007, which aimed to provide effective remedies for the maintenance and welfare of parents and senior citizens. However, this law was not applicable to the erstwhile State of J&K in view of Article 370 of the Constitution of India (as it then was). But in 2014, the erstwhile State of J&K also brought a similar legislation in the State for the welfare of senior citizens. The Act mandates the establishment of old age homes at accessible places, in a phased manner, beginning with at least one in each district. However, the state failed to create any such home in the erstwhile State.
In August 2018, when Hon’ble Ms. Justice Gita Mittal, took over as Chief Justice of J&K High Court followed by Hon’ble Mr. Justice Rajesh Bindal’s transfer to the High Court of J&K as first Puisne Judge, and taking over as Executive Chairman of J&K State Legal Services Authority in November 2018, the setting up of Ahata-e-waqar in a short span of an year in Jammu, Kashmir and Ladakh may be seen as a small step for man but a giant leap for mankind. Ms. Justice Gita Mittal who possesses unparalleled and vast experience of working as Executive Chairman of Delhi State Legal Services Authority and also as Chief Justice (A) of Delhi High Court had been working tirelessly for the cause of marginalized sections of society in Delhi. As one of the driving forces behind creation of “Swabhiman Parisar” (Day Care & Recreational Centre for Senior Citizens) at Kasturbanagar, Shadra, Delhi, Hon’ble CJ, High Court of Jammu and Kashmir has been making pioneering and tireless efforts not only to upgrade the Judicial infrastructure in sync with the green initiatives but has been laying significant thrust on enhancing the quality of lives of the underprivileged , be it the engagement of school dropouts, provision of crèche in court buildings or Ahata-e-waqars.
Ahata-e-waqar meaning a Place of Pride is a recreational centre for elderly people which provides them a place to live with dignity. Under the patronage and initiative of Hon’ble CJ, four Ahata-e-waqars have been established in four districts of UTs of J&K and Ladakh at Jammu, Srinagar, Ladakh and Kathua in a short span of one year and process to get the similar places established in other districts is also underway. In recognition of the rights of elderly people, on the occasion of World Elder Day, weeklong programmes were held across J&K with gusto and pride. This initiative of Chief Justice has not only brought smiles on the wrinkled faces of old people but has instilled in the neglected elderly people a sense and pride and the same is reflected in a series a celebrations held in these temples of pride where senior citizens could be seen welcoming the New Year by cutting the cake and re-living their life by being involved in recreational activities undertaken by respective District Legal Services Authorities. Such an initiative aptly reaffirms our faith that aging with wisdom and aging with dignity must go hand in hand aptly echoed in the words of Kofi Annan,
” Trees grow stronger over the years, rivers wider. Likewise, with age, human beings gain immeasurable depth and breadth of experience and wisdom. That is why older persons should not only be respected and revered; they should be utilized as the rich resource to society that they are.”
(The author is Member Secretary State Legal Services Authority UT of JK)