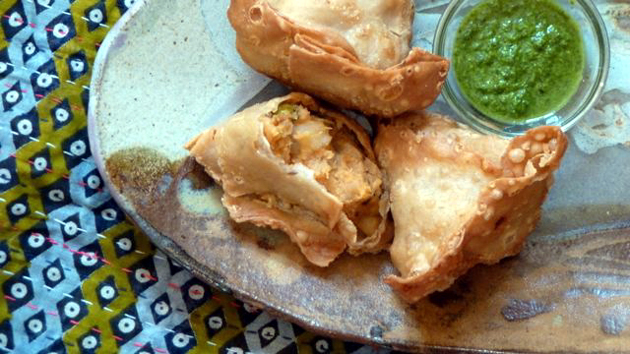 Indians’ favourite savoury snack -the samosa, is finding new fans in the American soil, discovers SPAN writer Jane Varner Malhotra
Look around a bit and you will find a version of this mouthwatering snack in every country, in every cuisine-an empanada, a calzone, a pierogi, a Cornish pasty, a dumpling, a spanakopita. Savoury food wrapped in a pastry served hot. What’s not to love?
Americans lay claim to a number of delicious and innovative sweet pastries. For savouries, however, they look to other countries and adopt, and the samosa is no exception.
As Indian food becomes widely available in the US-from urban take-out joints to the frozen-food sections of suburban grocery stores-Americans are ordering up the tri-cornered cornerstone of the subcontinent. And as they consume more and more samosas, over time they are also modifying them and making them their own.
A typical American might encounter her first traditional samosa by walking past an Indian market in a string of suburban shops. Drawn in by the aroma, before she knows it, she has put 75 cents on the counter and is feasting on a hot samosa and complimentary chai. Strolling happily through the aisles, the new customer discovers more than samosas for sale, of course-spices, rice and dal-and she fills up her cart with South Asian pantry staples. Indian grocery stores across America build customer loyalty through the humble, tasty, value-priced pastry.
Singh was born and raised in the Chicago suburbs by her Punjabi parents, who are engineers. She enjoys the mobility of the food truck, which helps expose more and more Americans to the Indian snack. She also believes that a food truck fosters experimentation. “I’m always doing R&D in that kitchen,” says the former engineer, who appeared as a contestant on the TV show “MasterChef” in 2011. “What’s beautiful about being on the truck is that you can make anything and see how it flies.”
While the contents of her samosas can get creative-lamb shawarma, peanut butter and jelly, pumpkin, Nutella-she keeps her dough traditional. “You’ve got to pay homage to the Indian culture,” she says, insisting on the proper casing, the foundation for all her samosas. “Otherwise, fusion just leads to con-fusion.”
Party appetisers offer another avenue for samosa introduction for many Americans. Large suburban supermarkets sell dainty, bite-sized varieties in the frozen section. Some versions from the freezer such as the “crispy samosas” from Saffron Road come packaged in boxes of a dozen, neatly arranged on a plastic tray, sealed inside a plastic bag. The appetiser samosas feature a farm-fresh veggie filling, according to the mouthwatering description on the box, with a delicate Greek-style phyllo dough. Baked for 20 minutes, these “all natural, premium hand-made” hors d’oeuvres make a tasty nibble but, despite the triangular shape, may be tough to recognise as a samosa.
Another version may taste familiar, but the appearance lays bare everything that a samosa pastry works to conceal. In San Mateo, California, Indian street food fans rave about the “deconstructed samosa” sold by Curry Up Now, a brick-and-mortar restaurant with a few food trucks working the San Francisco area. Here the pastry forms the platter, and the veggies sit on top. Reminiscent of the first time your grandmother cut apart a samosa on a plate for you, this delicious approach appeals to those who want to know what is on the inside.
A trip to Texas offers even more samosa creativity, with the Samosa Hut and Grill restaurant selling savory varieties like Thai chicken and cheese pizza and for dessert, a Dallas cheesecake samosa sundae topped with whipped cream. Further south in Houston, Kiran’s Restaurant and Bar serves a mushroom and feta samosa, or for a few dollars more, a tempting crab samosa.
For some, nothing suits a rainy afternoon in Sunnyvale more than a spicy, old-school potato samosa. Improving on that recipe may be a challenge, but Americans continue innovating for the next generation of samosa lovers.