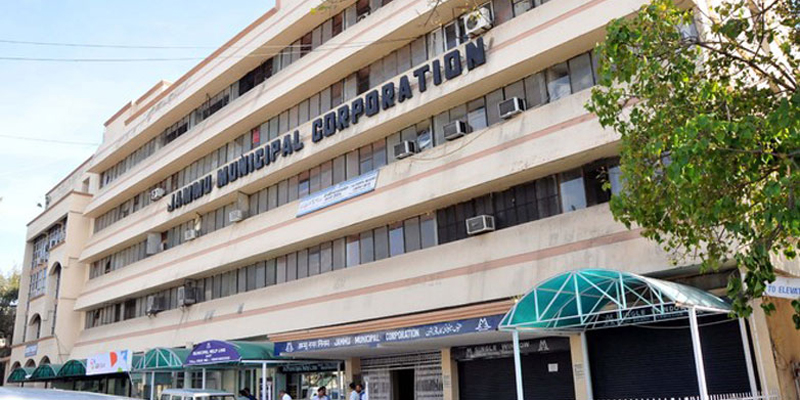 JAMMU, May 18: The BJP led Jammu Municipal Corporation (JMC) is all determined to impose Property Tax in Jammu and the agenda for the same will be introduced in the next General House meeting of the local body though the same was defeated in last such meet after protests by Congress, Independent and few BJP Corporators.
It is pertinent to mention here that the controversial Property Tax agenda was earlier too withdrawn from the General House Meetings of the JMC after protests by the Congress.
The recently held Executive Committee meeting of the local body chaired by the Mayor Chander Mohan Gupta has already passed the Property Tax and now it only requires an okay from the General House Meeting of JMC.
“Public is ready to pay the Property Tax but some of our own people are creating misunderstandings,” the JMC Mayor told Excelsior adding: “As we have an overwhelming majority in JMC’s House of elected public representatives, I am sure that we will get it passed in the next General House Meeting (GHM) and the Congress with its handful members will not be in a position to effectively oppose the passing of the agenda of Property Tax.”
“I will meet Ashok Koul (J&K BJP Organisation Secretary) in this regard and we will put the agenda in JMC’s next General House Meeting,” he further said.
Gupta also said that in the recently held GHM of JMC, all the Corporators spoke positively on the Property Tax.
“If we have to run the Corporation (JMC) and satisfy the developmental needs of the public, we need lot of money so JMC has to start its earnings from somewhere,” the Mayor maintained adding that self sufficient JMC will also fulfil PM Modi’s dream of Atamnirbhar Bharat.
“All Corporations of the country are running by the money collected from such Taxes,” he claimed informing that presently the Property Tax is nowhere being levied in Jammu city barring the cantonment area.
“If the people in cantonment area have no problem with it for the last many years then what problem is there with the people of rest of the Jammu city,” Gupta said.
He said that Property Tax will be both for residential and commercial type of property but initially the JMC will bar residential property and will not tax common man in this regard.
“If owner of a banquet hall charges Rs. 2-3 lakh for a single function then what problem he will have in paying Rs. 2 lakh or anything like that for a year as Property Tax,” he said adding that the exact amount to be collected in such a Tax shall be worked out once the GHM of JMC passes the agenda.
The Mayor said that the Property Tax will be levied in phase-wise manner and in the first phase commercial halls, shopping malls, hotels, big showrooms etc will be taxed while shops may be considered in the next phase.
BJP chief whip in JMC’s House of elected public representatives, , Parmod Kapahi when contacted said that initially the Property Tax will be levied on big business houses and residential property will be barred.
“Though there will be a discussion on this but if we have to run the Corporation we will need money,” he further said.
He said: “We have to be self sufficient and stop going with begging bowl in our hands asking Government for funds every time.”
Kapahi also said that before the General House Meeting, JMC Corporators will also meet in this regard to decide things.
Dwarka Chowdhary, Chief Whip of Congress said if the agenda of Property Tax comes in next GHM, they will again oppose it forcefully.
“They (BJP) already have got many things passed in the General House as they have a majority there and if they got the agenda of Property Tax passed in the same manner then it would have an exclusive consent of BJP and none else,” he said adding that this is the same BJP which used to raise hue and cry on a slight hike in prices of commodities.
Prof. Yudhvir Singh, Independent Corporator said BJP can’t pass the agenda of Property Tax as they have already failed twice while doing so after facing protest by opposition which ultimately had led withdrawal of the agenda of Property Tax.
“Still if they got it passed by using their majority, we will then also protest which is our democratic right,” Singh said.
“In last General House Meeting, the Mayor had said that they will impose Property Tax on big business houses but that was their tactic as they will ultimately tax the common man,” he claimed.